“The whole framework of the presidency is getting out of hand. It’s come to the point where you almost can’t run unless you can cause people to salivate and whip on each other with big sticks. You almost have to be a rock star to get the kind of fever you need to survive in American politics.” – Hunter S. Thompson, Fear and Loathing on the Campaign Trail ’72

This election cycle, the S&P 500 is once again indicated to open up over 1% following what was the worst ever last full week of trading for the S&P 500 heading into an election.  Will history continue to repeat itself over the next 36 to 48 hours?  About half of the population really hopes it does, while the other half really hopes it doesn’t.  Regardless of the outcome, hopefully, we’ll know the answer tomorrow night…or Wednesday…or this weekend…or at least the end of the year!

Be sure to check out today’s Morning Lineup for a rundown of the latest stock-specific news of note, market performance in the US and Europe, key earnings data from the US and Europe, economic data, trends related to the COVID-19 outbreak, and much more.

For the sake of comparison, we wanted to see how close 2016 and 2020 really have been to each other, so in the chart below we compare the S&P 500 in the year leading up to the last Friday before Election 2016 and now.  2020 is plotted on the left axis, while 2016 is on the right axis.  One major difference between the two periods is the level of volatility.  In 2016, the S&P 500 ‘only’ fell about 15% from its peak earlier in the year, while this year we saw a decline of more than 30%.  But once you get past the differences between the size of the moves, there are some similarities in the patterns.  In both cases, the S&P 500 bottomed from a significant decline in Q1, rallied sharply until late Spring, pulled back in June, and then rallied for the remainder of the Summer.  In both years, once election season rolled around in September, the market pulled back right up through the Friday before Election Day.  As the saying goes, history does not repeat itself but it often rhymes. 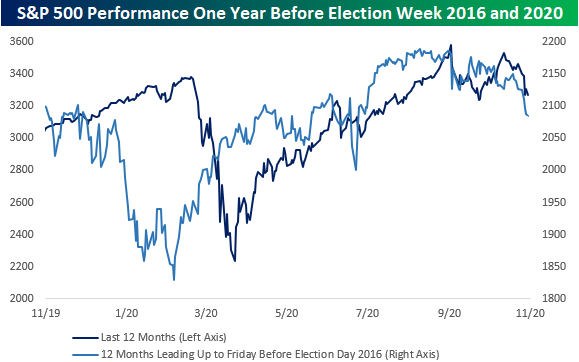