It was a pretty uneventful evening for global equities, that is, until Europe opened.  After opening slightly higher, European equities have been grinding lower all morning, and that has dragged US futures along for the ride.  Making matters worse, hawkish commentary hitting the tape in the last half hour from Jim Bullard and Esther George has only added to the negative tone.  On deck, we have Housing Starts, Building Permits, Philly Fed, and Initial Jobless Claims at 8:30.  Then, at 11 AM, we’ll get a November update on manufacturing from the KC Fed.

The first three quarters of 2022 were a time to forget for the euro as the common currency plunged over 16% YTD at its intraday low on 9/28 and well below the psychologically important parity level versus the dollar.  Since that intraday low, the euro has rallied over 8%, and in the process of that rally, it has broken the steady downtrend that had been in place all year.  This week, the euro has encountered another level of resistance at the 200-day moving average (DMA). On Tuesday and Wednesday, the euro tried and failed both days to stay above its 200-DMA, and today it is once again off its intraday highs but this time it never even made it to the 200-DMA.  Rallies failing at their 200-DMA are a classic trait of bear markets, and it’s a trend we’ve seen across financial markets all year, so it will be interesting to see if this level acts as similar resistance for the euro as well. 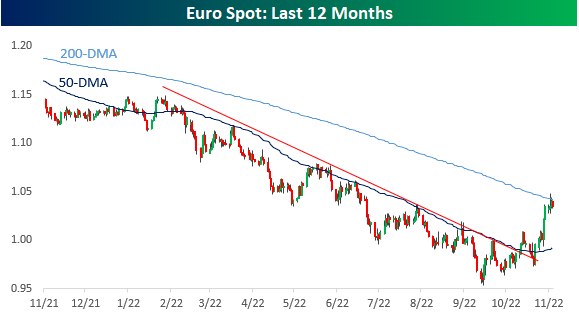 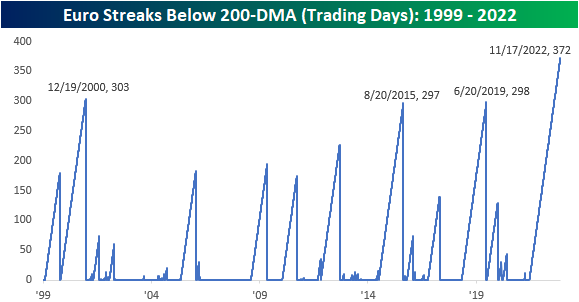