“Trying to sell short in this market is like being run over by a train that’s going to derail a mile down the road.” – Julian Robertson

Futures have been weakening as we write this and are now pointing to a negative open ahead of some important housing data at 8:30 AM.  Housing Starts came in at 1.52 million annualized which was weaker than expected and the second straight month that the headline reading missed expectations.  Building Permits also missed forecasts for the second straight month coming in at a level of 1.630 million versus forecasts for a rate of 1.644 million.

In earnings news, both Lowes (LOW) and Target (TGT) reported earnings this morning, and while both reports were better than expected, concerns over margins at TGT have that stock trading down over 3%.

Ahead of today’s reports on Building Permits and Housing Starts for October, yesterday’s release of homebuilder sentiment for November came in significantly stronger than expected suggesting that the recent uptick in interest rates hasn’t deterred potential homebuyers.  Rising rates also haven’t had a negative impact on homebuilder stocks recently either.  In yesterday’s trading, the iShares Home Construction ETF (ITB) didn’t quite trade at a new intraday high, but it did manage to hit a new high on a closing basis.  Meanwhile, the S&P Homebuilders ETF (XHB) not only hit a new intraday higher yesterday, but it has been trading at new highs on a pretty regular basis in recent days.  Unlike ITB, which is more of a pure-play on homebuilders, XHB has more exposure to companies like Home Depot (HD) and Lowes (LOW) that supply homebuilders as well. 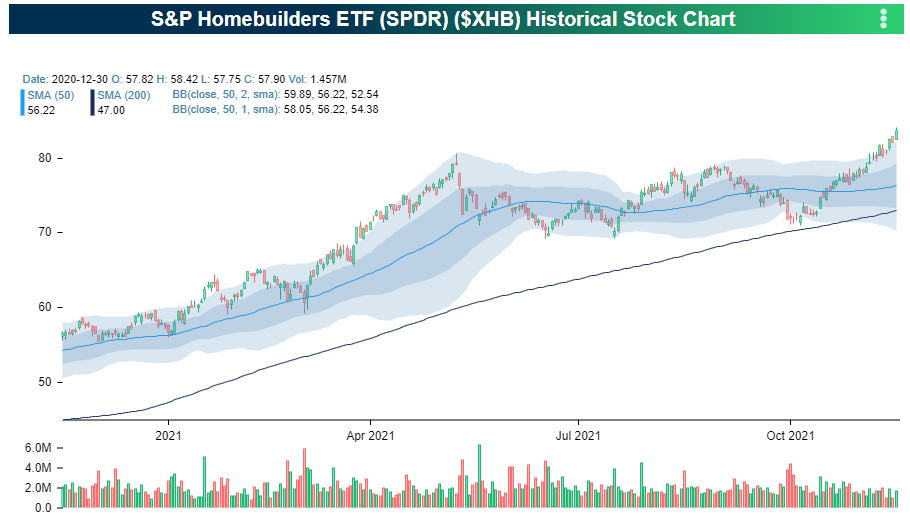