“If everybody is doing it one way, there’s a good chance you can find your niche by going exactly in the opposite direction.” – Sam Walton

Home Depot (HD) and Walmart (WMT) are on the tape this morning as earnings season winds down.  Both companies reported better than expected results on both the top and bottom lines.  WMT even raised guidance citing strong results in its eCommerce unit.  In reaction to the reports, both stocks are modestly higher with gains of between 1.0% and 1.5%.

Retailers are dominating the earnings headlines this morning and Retail Sales will dominate the economic data as well. There are a number of other reports on the calendar for today (Import Prices, Capacity Utilization, Industrial Production, Business Inventories, and Homebuilder Sentiment), but Retail Sales will kick the day off and likely be the most important release for investors.

Ahead of all the data, US equity futures are flat to modestly higher on the morning, treasury yields are modestly lower, and crude oil is back above $81. The real action this morning has been in the crypto space as most major currencies are down at least 5%.  Bitcoin briefly dropped below $59K and tested its 50-day moving average but has rebounded back above $60K since. Factors being cited for the move include the stronger dollar and another round of regulatory crackdowns in China as the government refers to crypto mining as ‘extremely harmful’.

We reached the mid-point of Q4 yesterday, and it’s hard to find much to complain about if you are a bull.  Besides the fact that SPY is already up nearly 9%, four sectors have rallied by double-digit percentages.  Looking at these four sectors, though, they aren’t necessarily ones you would look at as typically rallying in unison with each other.

With inflation being the number one concern of investors these days, the fact that Materials and Energy are near the top of the list in terms of performance shouldn’t come as much of a surprise, but the fact that they are accompanied by Consumer Discretionary and Technology is a bit surprising.  Consumer Discretionary is a sector that typically underperforms during inflationary periods, but it’s actually the top-performing sector so far this quarter.  Similarly, Technology, which is usually associated with growth stocks that should come under pressure when inflation is a concern as future earnings are discounted at a higher rate, has rallied nearly 12%.

Given some of the enormous market caps of some of the largest stocks in the S&P 500, some of the sector performance figures are skewed a bit.  Consumer Discretionary is a perfect example. With Tesla’s (TSLA) market cap topping a trillion dollars recently, the stock’s weight in the sector is above 15%, so the fact that it has rallied more than 30% already this quarter (even after dropping 18% in less than two weeks) is a big reason for the sector’s outperformance.  Within the technology sector as well, some of the largest stocks in the index have much more reasonable valuations than many other smaller names within the sector and given their dominant positions, they also have attractive earnings profiles.

On the downside, there is none so far this quarter, but the only two sectors that are up less than 5% so far on the quarter are Communication Services (XLC) and Health Care (XLV). 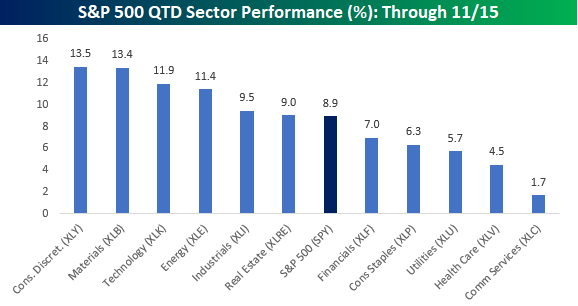