“Hunches and the mysterious ticker-sense haven’t so very much to do with success.” – Edwin Lefèvre, Reminiscences of a Stock Operator

We’re now in the thick of retailer earnings season, and this morning’s two big reports were from Home Depot (HD) and Walmart (WMT).  The former is trading modestly lower after reporting better-than-expected EPS and sales while reaffirming guidance.  WMT, meanwhile, is surging over 6% after a better-than-expected report and announcing a $20 billion stock buyback. More importantly, inventory levels at the company appear to be coming under control as management guided last quarter.  It’s been a roller-coaster ride for WMT this year.  After plunging this summer on a profit warning, the stock has recovered all of its losses, and based on where it is trading in the pre-market is now up on the year.

WMT’s positive report has contributed to a positive tone in the futures market.  Equities are firmly higher, led by the Nasdaq which is up well over 1%, crude oil is marginally lower, and the ten-year yield is lower.  This could all change at 8:30 with the release of the October PPI, but for now, rising stock prices accompanied by lower rates and lower oil prices are more than any bull could ask for.

The spread of the internet during the mid to late 1990s is traditionally regarded as a key catalyst behind the birth of day trading in the stock market.  The internet spawned online investing which enabled anyone with available funds to set up a brokerage account and point and click their savings away.  Day trading became popular during the dot-com bubble (and again during the COVID lockdowns when consumers flush with cash and nothing to do started trading on their mobile phones on apps like Robinhood), but day traders have been around much longer than that.  The founding of the Nasdaq in 1971 and its electronic platform facilitated the practice of more rapid trading, but day trading traces its roots all the way back to the late 1800s following the invention of the ticker tape which was first unveiled on this day 155 years ago.

Prior to Edward Calahan’s invention of the ticker tape, the only way stock prices were disseminated was by word of mouth, through the mail, or by messenger, and you can’t really day trade when you’re getting stock quotes through the mail (even FedEx didn’t start until 1971). Calahan’s invention unlocked the opportunity for anyone with a telegraph line and enough money to pay for a feed to set up a ticker tape and get ‘real-time’ stock quotes (actually delayed by a minimum of 15 minutes but still real-time in 1800s terms).  The ticker tape sped up the flow of information and enabled investors to make more well-informed decisions, but it also spawned the creation of bucket shops and other types of venues in cities across the country where traders could go and bet on the direction of stock prices intraday.

Throughout society and culture, we use all sorts of common phrases without even thinking about them (bite the bullet, hands down, etc).  In the investment sphere, ‘don’t fight the tape’ is one of them.  Without the invention of the ticker tape, there would have been no tape to fight for the last 155 years! Instead, investors would be ‘fighting the mail’ or the messenger (although from a messenger’s perspective being fought with certainly sounds a lot better than being ‘shot’).

When it comes to sentiment lately, consumers don’t seem to be fighting the tape.  The latest example we can cite came in yesterday’s monthly update to the NY Fed’s Survey of Consumer Expectations.  You may have seen some headlines highlighting the fact that both short-term and long-term inflation expectations ticked higher, but sentiment toward the stock market remains right near the lowest levels in the history of the survey (2013).  As shown in the chart below, barely more than a third of investors expect the stock market to be higher one year from now.  The only month with a lower reading was in June when it ticked down to 33.8%. 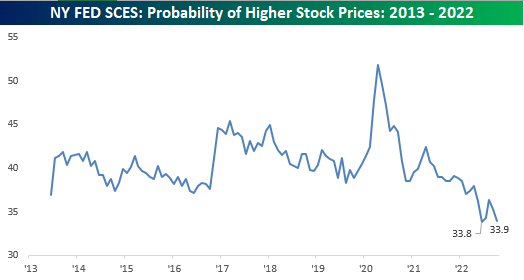