“The challenge of the retail business is the human condition.” – Howard Schultz

We’re heading into the final days of earnings season this week, and so far the results have been very positive.  Whether earnings season ends on a positive note or not will depend on how the market reacts to a slew of high profile earnings reports from the retail sector – most notably Walmart (WMT) and Home Depot (HD) on Tuesday, Lowe’s (LOW) and Target (TGT) on Wednesday, and then Kohl’s (KSS) and Macy’s (M) on Thursday.  Consumers still appear to be in a strong financial position but as last week’s sentiment report from the University of Michigan showed, they aren’t feeling particularly optimistic. And as the quote above implies, consumer sentiment is the key to retail sales.

Futures are higher to kick off the week, and it’s a slow day for economic data with Empire Manufacturing the only report on the calendar, and it came in better than expected.  The 10-year yield is modestly lower this morning and WTI is down over $1 and back below $80 per barrel.

Speaking of oil, the recent pattern for WTI has been interesting.  With the commodity having basically doubled over the last year, it’s hard to say anything negative about its performance, but we would note that the most recent peak in late October coincided right with its trendline of higher highs since the beginning of the year.  Since that peak, though, the recent pullback has seen WTI break its short-term uptrend line from the most recent low in August.  As it attempted to bounce back in mid-November, the rally stalled out right at that former uptrend line.  The key level to watch going forward will be right around $78.50 which would represent a lower low.  As long as that level holds in the short-term energy bulls probably don’t have a lot to worry about, but it’s a level that should be kept on the radar. 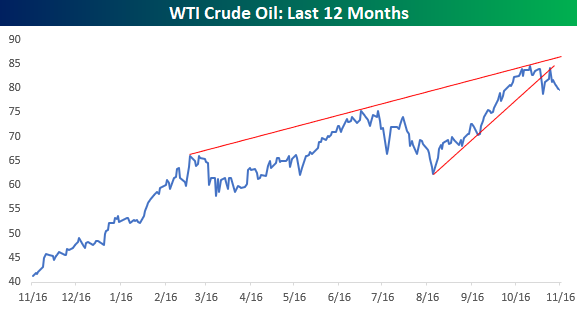