“It is not down on any map; true places never are.” – Herman Melville, Moby Dick

After a CPI-fueled monster rally last week where US stocks had one of their best weeks of the year, the tone in equities to kick off the new week has been muted.  Futures were lower overnight and remain in the red as we type this, but they have been gradually moving up off their overnight lows.  Treasury yields are higher this morning, but the 10-year yield is still below 3.90% for now.  If you were looking for signs of a Fed pause after last week’s relatively benign inflation print, Fed Governor Christopher Waller wants you to think again.  Bloomberg is reporting that the governor says “we’ve still got a ways to go” not before the Fed starts cutting rates but before it even stops raising rates.  He went on to say that last Wednesday’s CPI report was good news but just one data point.  We’ll grant the governor that October’s CPI may have been just one data point in the CPI series, but has he noticed the myriad of other pieces of data in the last few months that show inflation pressures have been easing, not to mention the fact that we’ve just seen one of the most aggressive paces of monetary tightening in a six-month span?

After rallying more than 14% off its October lows, Europe’s benchmark STOXX 600 index opened and traded above both its 50 and 200-day moving average for the entire session on Friday and is on pace to do the same thing again today.  That’s something we haven’t been able to say since January.  Perhaps even more impressive than the 14% rally in local currency is the fact that in dollar-adjusted terms, the STOXX’s performance off the October lows has been a gain of just over 20%.  The next level to watch for European stocks is the high from August.  Despite their short-term outperformance, European stocks remain in a deep hole relative to the US.  Over the last five years, the STOXX 600 is up 32% in dollar-adjusted terms while the S&P 500 has rallied 69%. 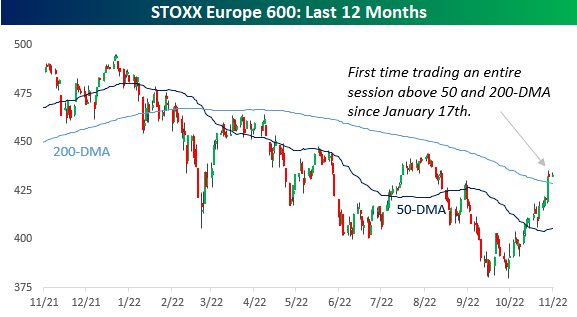