“He died unquestioning, uncomplaining, with faith in his heart and hope on his lips, that his country should triumph and its civilization survive.” – Warren G Harding

In observance of Veterans Day, the Federal government and banks are closed today.  That means that for today at least, stocks will not be able to fall because of rising yields.  Equity futures are modestly higher this morning with the Nasdaq leading the gains.  There’s no economic data on the calendar due to the holiday, and even the earnings calendar is relatively quiet.

Yesterday was one of those relatively uncommon days where it didn’t matter if you were in stocks or bonds- they both had a rough day.  While the S&P 500 was down around 0.80%, long-term treasuries dropped more than twice as much as the iShares 20+ Year US Treasury ETF (TLT) fell 1.83%.  Over the last ten years, there have been just 34 other days where SPY and TLT both finished the day down more than 0.75%, and in the charts below we summarize the performance of both ETFs in the day, week, and month following each prior occurrence.

Starting with SPY, the day after the 34 prior occurrences its median gain has been 0.17% with gains 57% of the time which is better than the average one-day performance for all one-day periods over the last ten years.  However, as you move out over the next week and month, median performance following these days where both SPY and TLT were down 0.75% or more, returns have actually been negative and well below the long-term average.  In fact, both one week and one month later, SPY was higher less than half of the time. 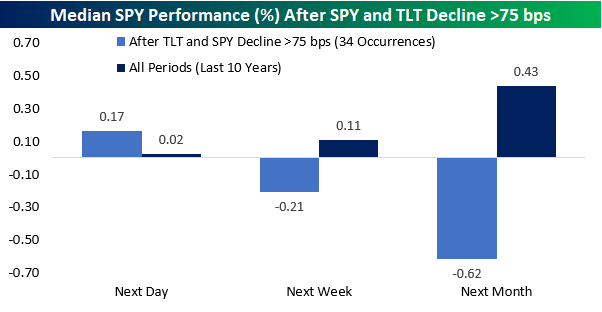 Although SPY has tended to show weaker than average performance over the following week and month, TLT’s median one-week and one-month performance has been better than average.  In fact, one month following the 34 prior occurrences, TLT only fell five times. 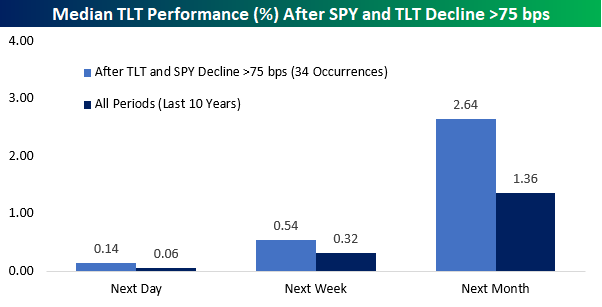