You can take the positive futures with a grain of salt this morning as everything is likely to and will change following the 8:30 Eastern release of October CPI.  Economists are currently forecasting the headline reading to increase by 0.6% m/m while the core reading is expected to be slightly more subdued at 0.5%.  That report will be the main course, but don’t forget about jobless claims.  Initial Jobless claims are expected to remain right around last week’s level of 217K.  Not much is expected to change with regard to continuing claims either, but if the consensus reading of 1.487 million comes in, it would be the highest reading since April.

The words above could really be attributed to anyone who invested in financial assets of any type this year, but when Jimmy Johnson uttered them on this day in 1984, he was referring to his Miami Hurricanes and their role in one of the biggest blown leads in college football history.  Playing Maryland, the Hurricanes took a 31-0 blowout into halftime in what was looking like a laugher. The Hurricanes of the 1980s were brash and known for their attitude, and they were also a team that most people outside of Miami eagerly rooted against.

That trash-talking Miami attitude was on full display back in 1984.  As Maryland’s Jess Atkinson described it, “No question about it. Those guys were the biggest cheap-shot, trash-talking, classless outfit of football players I’ve ever seen in my life…You can almost take getting beat if a team is kicking your butts and they’re doing it cleanly. And there was no question that they were kicking our butts in the first half. But that team made us mad, and it gave us a little extra incentive.” Well, the Terps came out determined in the second half and led by QB Frank Reich coming off the bench and throwing six touchdowns, they were able to somehow complete one of the most unfathomable comebacks in college football history.

It’s amazing enough to lead a team to one of the greatest comebacks in college football history, but Reich also managed to find himself on the winning side of one of the greatest comebacks in NFL playoff history nine years later on a freezing January Buffalo afternoon.  After trailing the Oilers 35-3 early in the second half, more than a few Bills fans left the cold and damp Rich stadium stands thinking about what could have been and looking ahead to next season.  The Bills didn’t give up, though.  One of his teammates reminded Reich that he had already been part of the greatest comeback college win, so perhaps he could do it again.  Reich then went on to tell the team that they had to take the rest of the second half one play at a time.  Using that play-by-play approach, the Bills staged a miraculous comeback as a wave of fans came back from the parking lots and filled the stands again to witness the 41-38 “Comeback” win.

As good a run of luck that Reich had in his football-playing career, his coaching career hasn’t been as lucky.  While he had a big turnaround in his first season when the Colts made the playoffs after starting off the season at 1-5, the years since then have been somewhat uneventful.  After starting this season with a record of 3-5-1, including a blowout loss to the Patriots last Sunday, Reich was unceremoniously fired by Colts owner Jim Isray.

Like the lucky streaks often seen in sports among teams or individual athletes, they all eventually end.  2022 has been a year where the market’s luck looks to have run out, and a Frank Reich comeback isn’t in the cards.  Judging by various measures of sentiment, the only question now seems to be how much worse things will get.  Even though we’re in what has historically been the best time of year for equities, individual investor sentiment, as measured by the American Association of Individual Investors, has shown a higher percentage of bears than bulls every week this year except one! As shown in the chart below, sentiment this year has been especially negative as there has only been one week where bullish sentiment exceeded bearish sentiment.  Prior to 2022, there was no other year since 1987 where fewer than 25% of all weeks had more bulls than bears.

It’s been a terrible year.  Everything that has happened, though, is in the past.  Rather than looking back on the year and thinking about what could have been, investors always need to be looking forward and thinking of what could be. 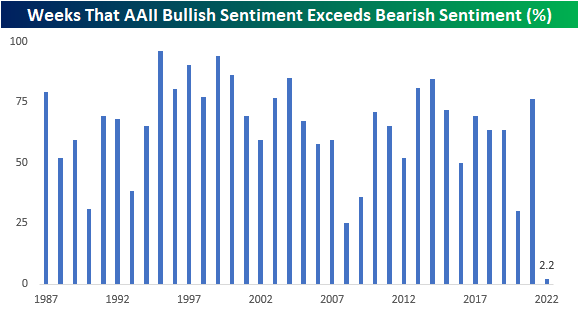