“Success or failure in business is caused more by the mental attitude even than by mental capacities.” – Walter Scott

After days where it seemed as though stocks could only go up and yields could go down, major US indices are poised for their second straight day of losses while the yield on the 10-year is up from its lowest levels since late September. Coming into today’s CPI report for October, there was some upside risk based on certain aspects of yesterday’s PPI report, and that definitely showed through in the numbers as headline CPI rose 0.9% versus forecasts for an increase of 0.6%.  Core CPI rose 0.6% which was also significantly higher than the 0.4% forecasts.  On a y/y basis, headline CPI rose 6.2%.  Outside of October 1990 when y/y CPI rose 6.3%, this reading hasn’t been higher since the early 1980s.

Due to the Veterans Day holiday tomorrow, jobless claims were released a day early this week, and the results were also not what the market wanted to see as both initial and continuing claims came in higher than expected.  In reaction to both reports, equity futures have dropped modestly and yields are higher but not to a large degree either way.

The decline in the 10-year yield over the last several days (before today) caught a number of investors off guard.  After rebounding off its summer lows right around 1.25%, the yield ran up to just above 1.7% in late October.  Just as the taper started to show up on the horizon, though, the upside momentum in yields stalled out and quickly started to reverse even as inflation data continues to run hot. 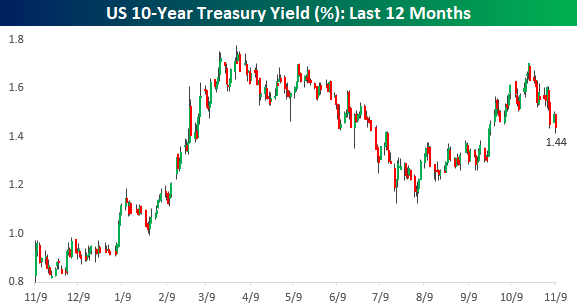 Since the 10-year yield peaked on 10/21 just above 1.7%, it has seen a rapid decline falling to 1.44% yesterday.  While it’s a bit of an arbitrary time window, the current 13-trading day decline of 27 basis points (bps) in the 10-year yield is the second largest over the last 12 months behind only the 28 bps decline seen in mid-July.  That decline actually came right around the low point in yields for the summer.  How markets react to today’s much higher than expected October CPI report will likely give us clues as to whether or not the same reversal in yields plays out this time around too. 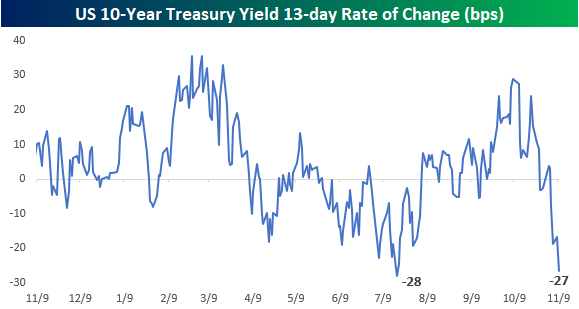