“For every moment of triumph, for every instance of beauty, many souls must be trampled.” – Hunter Thompson

After the best month for the DJIA since 1976 (and a strong but not nearly as notable month for the S&P 500 and Nasdaq), the markets are looking to kick off November on the same bullish footing as both the S&P 500 and Nasdaq are on pace to open higher by over 1%.  It’s not just US stocks that are rallying either.  Chinese stocks surged overnight on rumors that the country would relax its COVID restrictions, and the gains followed right into the European markets as major averages on the continent are up over 1% across the board.  Bond yields are also lower and commodities are rallying.  In fact, just about everything except for the dollar is trading higher this morning.  Even the yen is up!

There are three economic reports on the calendar this morning, and they’re all at 10 AM.  The JOLTS report is lagged a month (September), but that will be an important indicator to watch to see if there’s any follow-through from last month’s big drop.  A decline well below 10 million would be just what the Fed would want to see heading into this week’s meeting.  Also at 10 AM, we’ll get September Construction Spending which is expected to fall by 0.6% compared to last month’s decline of 0.7%, and most importantly, the ISM Manufacturing report is expected to decline right to 50.0.  Anything below that would indicate a contraction in the manufacturing sector.

Earnings season is barely half over, but already it’s been a memorable one.  Think about this for a minute.  While Apple (AAPL) managed to buck the trend and rally over 7% in reaction to its earnings report last week, the other mega-caps in the S&P 500 like Alphabet (GOOGL), Amazon.com (AMZN), Microsoft (MSFT), and Tesla (TSLA) all fell 7% or more in reaction to their reports.  Additionally, Meta (META), which is no longer a mega-cap because it fell so much, lost a quarter of its market cap in a single day!  Despite the pummeling in the S&P 500’s largest stocks, the index is still up over 6% this earnings season.  Talk about resilience!

The chart below compares the performance of the S&P 500 at this point in earnings season to the same point (24 calendar days) in each prior earnings season since the start of 2009.  The 6.4% rally so far ranks as the best since Q3 2011.  Going back to the start of 2009, there have only been two other earnings seasons where the S&P 500 was up more at this point in the reporting period, and there were only a total of five where it was up more than 5%.  Now, just because equities have done well this reporting period doesn’t mean it’s off to the races from here (last earnings season the S&P 500 also performed well only to crater from late August through early October), but the market’s ability to rally with no help from its ‘generals’ is impressive. 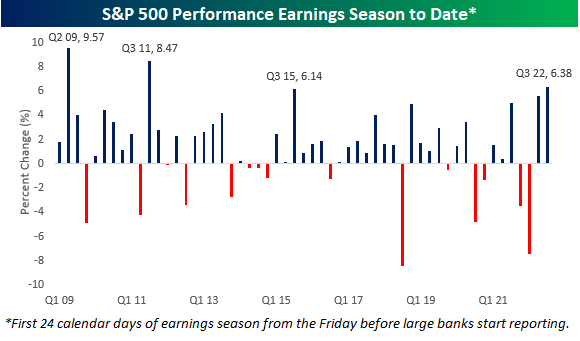