“I sometimes compare my brainstorming on paper to the drilling of oil wells. The only way to strike oil is to drill a lot of wells.” – Tom Monaghan, Founder Domino’s Pizza

Futures have been rallying all morning and are currently trading at their highs of the session.  The catalyst this morning is – you guessed it – more stimulus hopes.  In other news, IBM pre-announced better than expected results and said it would spin-off its managed infrastructure unit.  In economic news this morning, jobless claims came in at 840K versus consensus forecasts for a level of 820K.  Continuing Claims came in at 10.976 million which was much lower than forecasts for 11.4 million.  Overall, a mixed bag but it’s encouraging to see continuing claims drop below 11 million for the first time since March.

Small caps have been a disappointing area of the market for the last few years now, but the last few days have been a different story.  Over just the last ten trading days, the Russell 2000 has rallied more than 10%.  That’s the strongest 10-day rate of change for the index since the Spring coming off the COVID crash lows.  While there have been plenty of other instances where the Russell 2000 saw a stronger 10-day rate of change, what makes the current period unique is that while most big rallies in the Russell 2000 have come after sharp declines, that wasn’t the case this time around.

The lower chart shows the Russell 2000’s 10-day rate of change going back to the start of 2018.  In the rally off the March lows, the Russell 2000 had previously been down more than 30% over a 10-day period, and before that the 10%+ rally in early 2019 followed what was a 12% decline just before.  The most recent rally, though, has been different.  At no point in the last 50 trading days has the Russell 2000’s 10-day rate of change seen a decline of more than 5%.  In other words, while most prior big short-term rallies have been a snapback from a prior decline, there was no big drop to snap back from this time around. 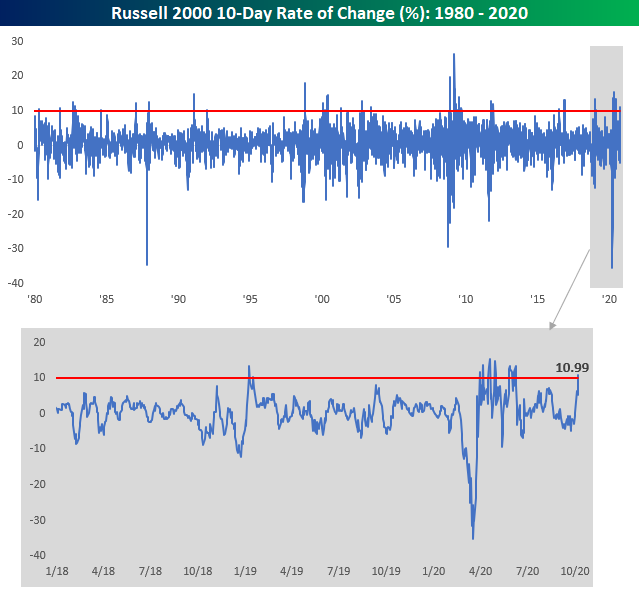