The above comment was made by coach Heisman during halftime of a game on this day in 1916 when Georgia Tech was beating Cumberland University by a score of 126-0.  Bulls are this year’s Cumberland University as financial assets of all types are in the red YTD, and the classic 60/40 portfolio is having its worst year on record.  This week, they’ve seen a faint glimmer of hope even as the Fed keeps turning up the heat, but it remains to be seen if they can chip away at the bears’ lead.  After taking a 126-point lead at the half, Georgia Tech went on to win 222-0 in what was the most lopsided college football game of all time. The bulls can only hope the next three months don’t play out like the second half of Georgia Tech vs Cumberland and make 2022 one of the most-lopsided years in terms of downside stock market performance.

Today’s employment report isn’t going to help the bull’s cause.  While Non-Farm Payrolls only surpassed expectations by 8K (263K vs 255K), the Unemployment Rate came in at 3.5% versus forecasts for an increase to 3.7%.  Futures, which were higher heading into the report, have reversed those gains and are now indicated modestly lower.

When the economy was cratering during the early days of COVID, once the Federal Reserve and Congress stepped in with massive stimulus, markets looked right through the weakness and rallied.  Two years later, we’ve done a 180.  Heading into today’s Non-Farm Payrolls (NFP) report for September, seven of the eight reports for 2022 have come in better than expected.  Over the course of these eight reports, the initially reported reading was an average of 133K greater than consensus forecasts.  That may not sound like a lot, but prior to COVID, there were only six other NFP reports out of 262 where the actual reported reading exceeded consensus forecasts by more than that amount.

Even as the US employment situation has outperformed expectations this year by an unprecedented margin, stocks haven’t liked it one bit. The table below lists the date of each NFP report this year and summarizes how the initial reading came in relative to expectations along with how the S&P 500 performed on the day (using SPY as a proxy). Of the seven NFP reports that came in better than expected, the S&P 500 gapped lower by an average of 0.48% and finished the day down by an average of 0.55% six out of seven times.  The economy may be doing OK, but once again, the market is looking right through it to one of the most aggressive tightening cycles by the Federal Reserve investors have ever seen. 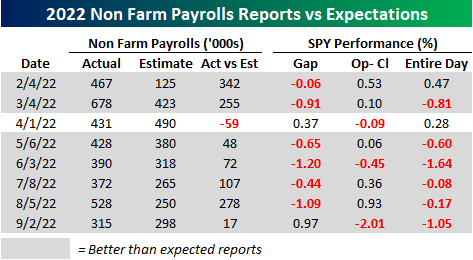