“If everyone is moving forward together, then success takes care of itself.” – Henry Ford

It may not feel like it, but based on where futures are currently trading, the S&P 500 is up over 2% for the month of October and the Nasdaq is up 1.5%. Yesterday, at this exact same time the S&P 500 was flat on the month and the Nasdaq was down over 1%.  No one said October isn’t a volatile month!  Who knows where things will settle out at the closing bell when markets close the book on the first week of October, but bulls will take the gains however they can get them.  While stocks are higher to kick off October, sentiment hasn’t improved as the weekly AAII sentiment survey showed a modest decline in bullish sentiment falling from 28.1% down to 25.5% putting it just three percentage points above its low of 22.4% from three weeks ago.

The economic calendar is light today as Initial and Continuing Jobless Claims are the only two data releases on the calendar, and both came in lower than expected. In terms of Fed speakers, the only one scheduled is Cleveland President Loretta Mester at 11:45 (speaking on policy).  With the lack of data, all eyes will likely be on DC again today as lawmakers look to avoid an impasse on raising the debt ceiling.  Following McConnell’s offer of a short-term extension yesterday, it appears as though we could be kicking the can down the road so we can take it up again later in the year, but for now, it likely removes a major overhang on the market and economy.

Equities are off to a positive start for October, but from a technical basis, both the S&P 500 (SPY) and Nasdaq 100 (QQQ) have some work to do in order to break their short-term downtrends.  As shown in the charts below, even after taking into account this morning’s gains, both indices have yet to break their short-term downtrends and remain below their 50-day moving averages (442 for SPY and 369 for QQQ). 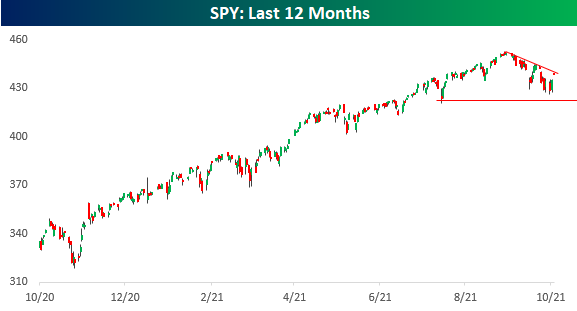 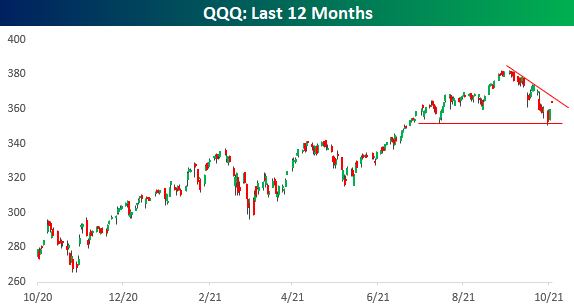