“I hope to let every citizen know what steps he can take without delay to protect his family in case of attack.” – John F. Kennedy

The focus for the rest of the week will be on jobs and Fedspeak with jobless claims today (higher than expected) and the September jobs report coming out tomorrow.  In addition to the hard data, there are at least seven Fed speakers scheduled to speak between now and the end of the trading week.  Last night, Atlanta Fed President Raphael Bostic was relatively hawkish when he noted that the fight against inflation was still in its ‘early days’ and sees the Fed Funds rate rising to around 4.5% by the end of the year and then from there the Fed should assess where the economy is heading.  The path of a hike to 4% or 4.5% and then a pause (rather than a pivot) from there seems to be the Fed’s ‘plan’ at this point.

Investor sentiment this week improved after the market’s rally but with bullish sentiment still below 24% sentiment remains extremely depressed. There’s still a lot going wrong these days.  The prices we’re paying for everything remain higher than we could have ever imagined, relations with China and Russia haven’t been this strained in a generation, a major hurricane just decimated parts of one of the country’s largest states, and by some measures, Americans have never been more miserable.  It stinks out there.

But if you think you have it bad now, we’ve been here before, and it’s been even worse.  Consider yourself lucky that Joe Biden isn’t on TV or TikTok today with a hammer and nails giving you a step-by-step guide on how to build a bomb shelter in the event of a nuclear attack.  That may sound farfetched, but that’s where we were just 51 years ago today when President Kennedy made the comments above in a speech on the threats of an attack. And this was a full year before the Cuban Missile Crisis.  The current geo-political backdrop is far from stable these days, but at least we’re not all learning to build bomb shelters in our basements or know at least where the closest Fallout Shelter is.  Some of you out there may even remember firsthand or through stories from your parents of drills where they would get under their desks in order to protect themselves from nuclear fallout.  A lot of good that would have done.

What a difference a few days can make in the markets.  Equities around the world are gingerly easing themselves out of the bunker from weeks of declines that brought them into oversold territory.  Just over a week ago, on September 27th, every regional equity ETF with the exception of the Latin America ETF (ILF) that we track in our Trend Analyzer tool was in extreme oversold territory, and all but two had been down at least 5% over the prior five trading days. Six were even down over 7%. 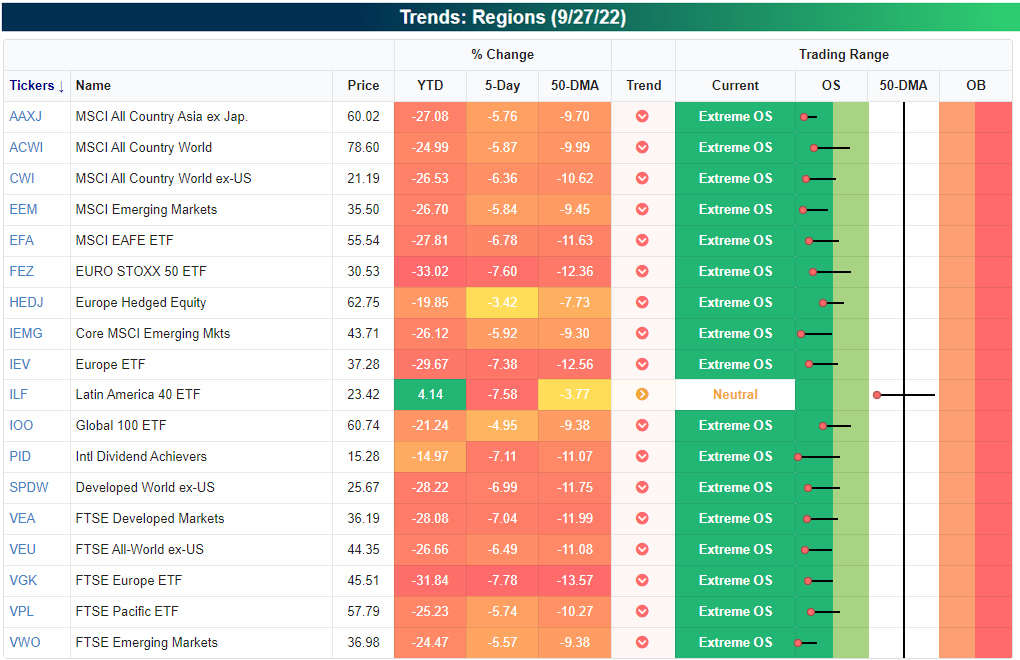 Fast forward to the present and every one of these same ETFs has now notched gains over the last week and each one of them has moved out of ‘extreme’ oversold territory.  They’re still oversold and only ILF is not down by double-digit percentages YTD, but you have to start somewhere.  As we noted in Wednesday’s quote of the day, “When nobody wants something, that creates an opportunity.”  Nobody wanted anything to do with stocks – or for that matter, any other asset – as the third quarter ended last week.  Investors have hardly fallen back in love with equities again, but they left a pillow on the couch and the back door unlocked. 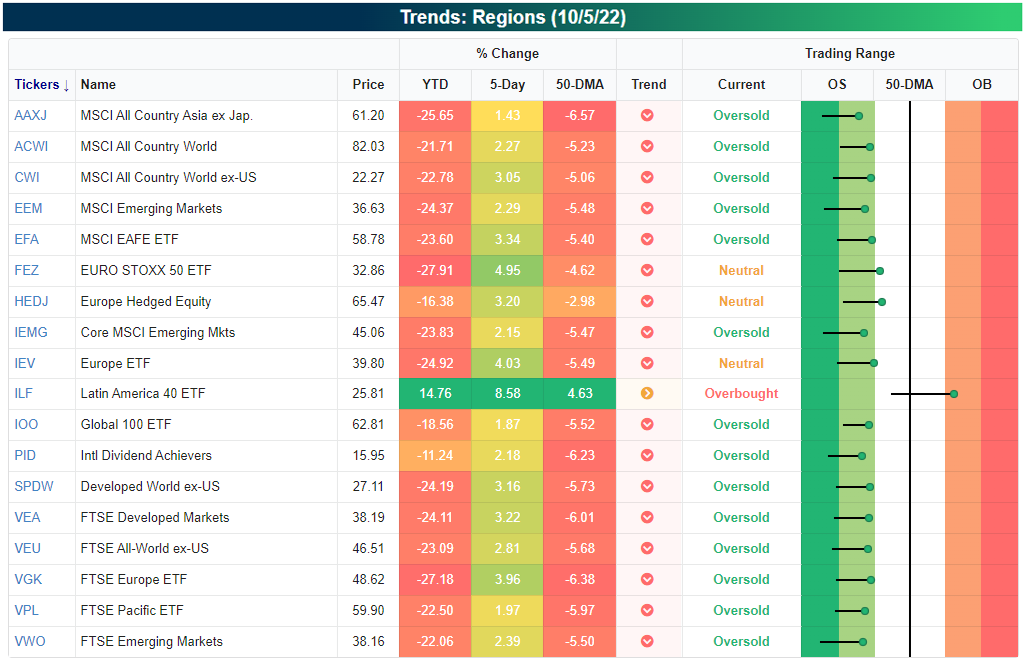