“When nobody wants something, that creates an opportunity.” – Carl Icahn

Equity futures are giving back much of yesterday afternoon’s gains and treasury yields are higher as markets reverse some, but certainly not all, of the moves from the last two trading days.  ADP Private Payrolls increased 208K in September which was slightly above the consensus forecast of 200K.  Oil is down marginally today ahead of an expected production cut announcement today, but crude rallied over 8% to start the week in anticipation of today’s decision.  Overnight and this morning, we’ve seen the release of Services PMIs for a number of countries, and the general trend was of sequential declines suggesting that economic momentum continues to wane.

The S&P 500 rallied 5.7% in the first two trading days of the week, and while large, moves of this magnitude haven’t been unprecedented, and looking back over the last 50 years, there have been more than 30 other two-day rallies of 5%+.  This week’s move was the largest since April 2020 and we saw a number of similar moves in the weeks coming off the COVID lows.  Between those occurrences and the Financial Crisis, there was one occurrence in late 2018 and another in August 2015. 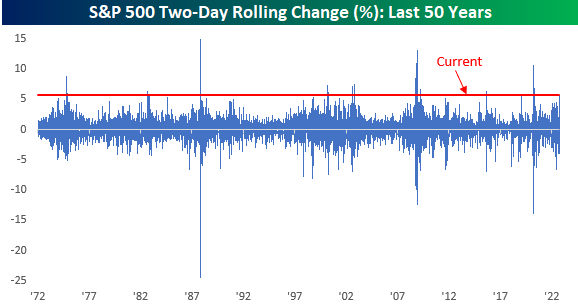 The red dots in the chart below indicate every prior day where the two-day trailing return of the S&P 500 was 5% or more. In recent years, a number of these occurrences came right or near market lows, but over the longer term, they have sprung up in all sorts of market environments like near market tops, early in a downturn, near market lows, or in the early stages of new bull markets.  In other words, their level of significance is debatable. 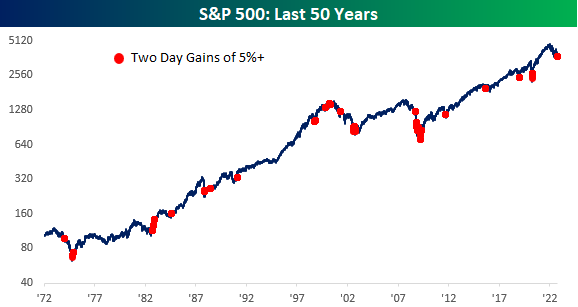