“It’s better to burn out than to fade away.” – Neil Young

After an exceptionally strong end to last week, equities are in a bit of a letdown mode to close out October as S&P 500 futures are down about 0.30% with the Nasdaq weaker.  A number of weak data points out of China and Europe along with continued geo-political concerns haven’t helped sentiment.  The 10-year yield is firmly above 4% again this morning and crude oil prices are nearly 2% lower and back below their 50-DMA. It’s been nice over the last several sessions not to have to contend with the FOMC, but that will all change on Wednesday when they will likely raise rates by 75 bps for an unprecedented fourth straight meeting.

We’ve seen some wild finishes to the trading week lately.  Over the last 12 weeks, there has only been one Friday where the S&P 500 didn’t finish up or down at least 1% (9/16), and over the last six weeks, the last trading day of the week has seen a gain or loss of at least 1%.  Not only that, but the last trading day of the week has become even more volatile over the last four weeks.  Of the four Fridays this October, the S&P 500 has rallied or declined at least 2% each time.  The first two Fridays of the month experienced declines of 2.8% and 2.4%, respectively and the last two Fridays have seen gains of 2.4% and 2.5%.

Prior to this month, going back to 1952 when the five-trading day week was established on the New York Stock Exchange, there were only four times when the last trading day of the week had a daily move of +/-2% for three straight weeks, but none of those streaks never extended to four.  There’s a first for everything, though, and this month’s streak is the first time in over 70 years that the S&P 500 has ever had four straight 2% gains or losses to end a trading week. 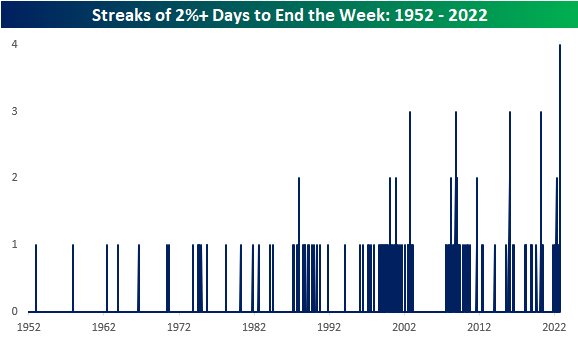 Last Friday’s 2%+ gain for the S&P 500 capped off what was a weekly gain of just under 4% for the S&P 500 in what was a broad rally. Sectors leading the way higher were Industrials, Utilities, Financials, Real Estate, and Consumer Staples which all had gains of over 6%.  Health Care and Technology also marginally outperformed the S&P 500 gaining over 4%.  On the downside, Communications Services was by itself the to downside as negative reactions to earnings from Alphabet (GOOGL) and Meta (META) weighed on the sector.  Lastly, even though they all rallied over 1.5%, Consumer Discretionary, Energy, and Materials all underperformed. 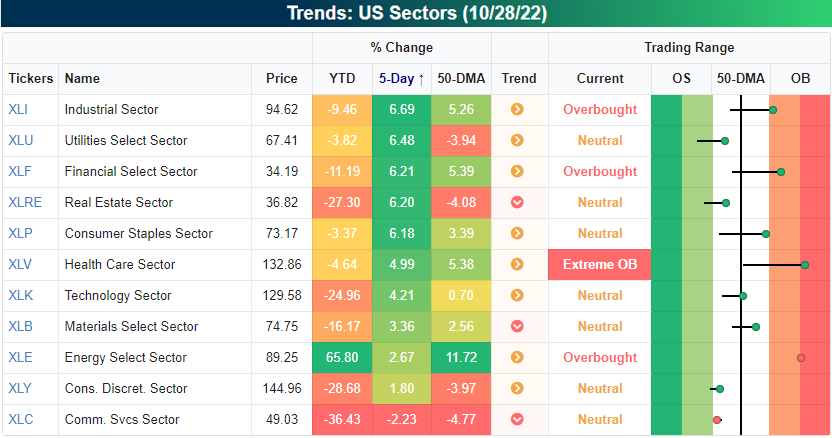 As far as the major indices are concerned, the chart patterns for both the Nasdaq 100 and the S&P 500 look very similar.  The key difference between the two is that while the S&P 500 managed to rally back above its 50-DMA last week, the Nasdaq 100, weighed down by weakness in mega-cap stocks and their reactions to earnings, has yet to break above that critical level.