“Nature is pleased with simplicity. And nature is no dummy” – Isaac Newton

Futures are indicating a negative end to the week and the month, but it probably could have been worse.  With Apple (AAPL) and Amazon.com (AMZN) both down close to 4%, they are accounting for just about all of the weakness in equities at the open.  Even with the losses, though, October is on pace to be the best month for the S&P 500 since last November and the best October since 2015.

In the latest dump of economic data, the only outliers relative to expectations were the Employment Cost Index (ECI) which came in higher than expected, and Personal Income which declined more than expected.  The only remaining reports scheduled are Chicago PMI and Michigan Confidence shortly after the opening bell.

It may seem like the law of gravity sometimes gets suspended, but it usually makes its presence felt at some point.  In the case of Apple’s (AAPL), that was last night as the company traded down in reaction to weaker than expected earnings and lowered guidance citing the impact of supply chain issues.  With the stock indicated to gap down close to 4% at the open, it is on pace for its worst earnings reaction day in exactly a year.

Heading into last night’s earnings report, AAPL still held the title of the company with the largest market capitalization in the world at $2.46 trillion, but its lead over Microsoft (MSFT) was slim at ‘just’ $20 billion.  When the opening bell rings today, though, MSFT will move into the top spot by virtue of not falling as much as AAPL.  Looking at the performance of each stock over the last year, there has been a growing divergence between the two stocks.  Up until late February of this year, both were performing relatively in line with each other, but ever since March, MSFT has been widening the gap over AAPL.  Based on where each stock is trading in the pre-market, MSFT’s gain of 59.69% over the last year is just over double the gain of AAPL. 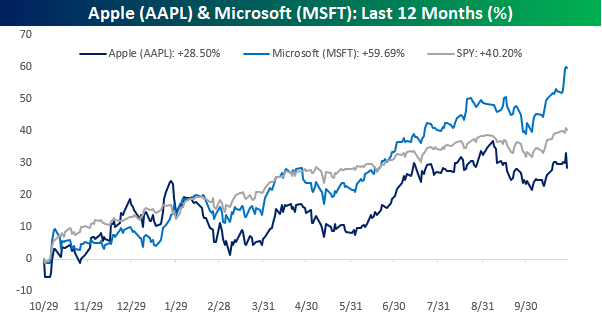