With COVID cases hitting new highs in both Europe and the US and little indication of any breakthrough in a stimulus deal, it doesn’t look as though any Monday rally is in the cards.  These can’t be the only reasons for the market’s weakness this morning.  Last Friday it was already apparent that case counts were turning higher and the hopes for stimulus were also dim.

Just as important as these developments, an extremely weak earnings report from German software firm SAP (SAP) has also pulled European stocks lower.  The stock is down over 20% this morning after commenting that new lockdowns in Europe will hurt demand for the company’s products and services.  We’ll hear from the major US mega caps later this week, and any suggestions of weakness on their part will not be met with a friendly reaction.

Be sure to check out today’s Morning Lineup for a rundown of the latest stock-specific news of note, market performance in the US and Europe, key earnings data from the US and Europe, mixed economic data, trends related to the COVID-19 outbreak, and much more.

Last week at this time, we were highlighting the fact that TSA air passenger throughput had just surpassed 1,000,000 for the first time since March.  With strong numbers like that, it seemed as though the re-opening track was running relatively smooth.  Unfortunately, the seven days since last week’s million passenger reading haven’t been nearly as strong.  For seven straight days now, the total number of daily passengers on US airlines have been lower than the same day a week before.  That’s the second-longest streak of consecutive daily week/week declines since the start of the pandemic.

In terms of magnitude, the size of the week/week declines has been small on a percentage basis (average of 3%), so it’s not as though air traffic is crashing to a halt, but if the million passenger milestone was a positive trend towards reopening, the slowdown that has followed it suggests that rising case counts have caused Americans to hunker down a little bit.  That’s the kind of environment we find ourselves in these days where a real-time indicator of economic momentum can indicate a positive trend at one point and then one week later it totally contradicts itself. 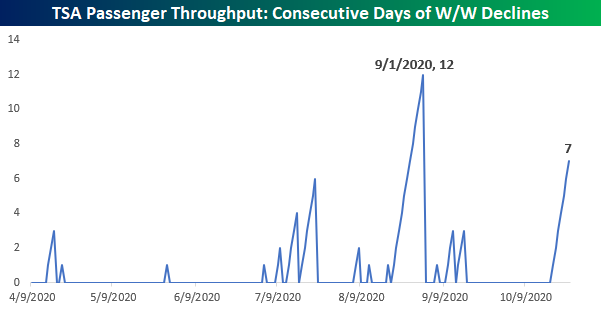