“There are a lot of mistakes made in games. That one just happened to be more visible than some of the others.” – Jim Marshall

58 years ago today, Vikings defensive end Jim Marshall recovered a 49ers fumble and ran it back to the endzone for a defensive touchdown.  At least he thought it was.  Unfortunately for Marshall, he ran into the wrong endzone turning what he thought was a Vikings touchdown into a safety. The Vikings still ended up winning the game, so the only people potentially impacted by Marshall’s bonehead play were the gamblers.

Less than two weeks ago, the S&P 500 closed at a new low for the year the day before what was widely anticipated as the most important economic report in weeks with the release of the September CPI on 10/13.  That report was a ‘big play’ for the bears as both the headline and core readings came in higher than expected, and the y/y core reading hit a new cycle high of 6.6%.  Stocks opened the day of the 13th sharply lower, and bears continued to run with it from there.  Like Jim Marshall, though, they went the wrong way!  The S&P 500 finished the day of the 13th up 2.6% and is now up 6.3% from its closing low on 10/12.

Despite the rally, 2022 is still a blowout as the S&P 500 remains down over 20% YTD with the Nasdaq down nearly 30%, so, like the “Purple People Eaters” of the early 1960s, the bears can still laugh about the wrong way move.  The chances for Bulls this year are still slimmer than they are of Lloyd Christmas ending up with Mary Swanson, but stranger things have happened.  Back in Super Bowl LI, the Falcons were up 28-3, and we all remember how that one ended.  So “there’s a chance” however slim it may be.

The ‘wrong way rally’ has taken a breather this morning as futures are moderately lower ahead of a relatively busy day for economic data with Case Shiller housing numbers at 9 AM and then Consumer Confidence the Richmond Fed report at 10 AM.  With the weakness in equities, treasury yields are lower and crude oil is down about 1%.  The pace of earnings reports has really picked up steam and the results this morning have been somewhat lackluster.  Of the nearly 40 reports so far this morning, 64% have exceeded EPS forecasts, and 62% of exceeded revenue estimates.  Also slightly more companies have lowered guidance than raised it.  The first big test of the earnings season will start after the close, though, when Alphabet (GOOGL) and Microsoft (MSFT) report after the close.

It seems as though this year stock prices have been driven entirely by interest rates, but a close look shows that in recent weeks that hasn’t entirely been the case.  Take a look at the chart of the S&P 500.  While it briefly broke below its June lows in late September and early October, it has recently rebounded and yesterday actually closed more than 3% above its June low. 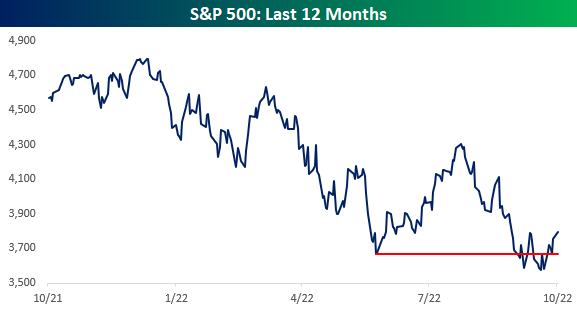 If interest rates were the primary driver of stock prices, given where the S&P 500 is trading, you would expect to see the US Treasury yields right around or maybe even below the levels it was at in mid-June.  That hasn’t been the case though.  Take the 10-year yield, for example.  At the S&P 500 lows in June, the yield on the 10-year peaked at 3.47%.  It eventually fell back down to as low as 2.57% in early August, but since then has surged right through the June highs all the way up to yesterday’s high of 4.27%, or 80 basis points more than the June high.  The fact that equities have been able to hang in relatively well despite the surge higher in yields suggests that stocks may be starting to look past the pressure from higher rates. 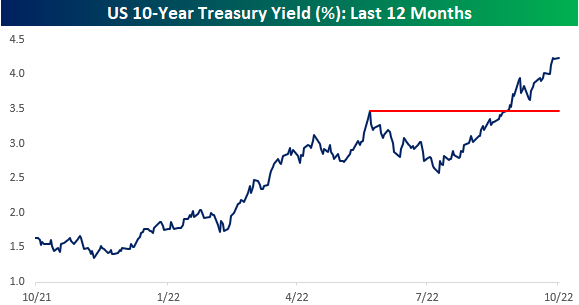