“The problem is that a lot of big companies, process becomes a substitute for thinking. You’re encouraged to behave like a little gear in a complex machine. Frankly, it allows you to keep people who aren’t that smart, who aren’t that creative.” – Elon Musk

After a six-day rally of over 4%, the S&P 500 is indicated to open lower this morning along with the other major averages.  The big drag on sentiment this morning is the 10-year yield which has spiked by about 4 bps in the last two hours taking yields to the highest level since May.  Along with a busy slate of earnings, there are a number of economic indicators on the calendar that have the potential to swing things in the hours ahead.  Jobless claims and the Philly Fed will be released at 8:30 AM while Leading Indicators and Existing Home Sales will hit the tape at 10 AM.

With bitcoin hitting a new high this week, we wanted to update the comparison between ‘digital gold’ (bitcoin) and physical gold over the last year. Like bitcoin’s actual price, the ratio of bitcoin to gold also hit a new high this week topping the prior record high of 36.2 from April and finishing off yesterday at 37 ounces of gold to one bitcoin.  That represents more than a six-fold increase in just the last year! 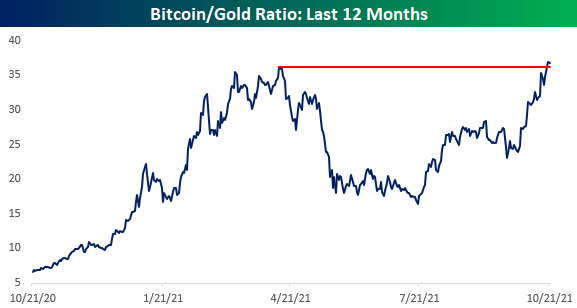 While bitcoin has been on a tear relative to gold, priced in terms of ether, it has underperformed over the last year.  Last October, one bitcoin was worth more than 30 ether, but over the next six months that ratio rapidly compressed falling to as low as 12.3 this May.  Ever since then, bitcoin and ether have been moving closer in tandem with each other as the ratio has been contained to a range between 12 and 18. 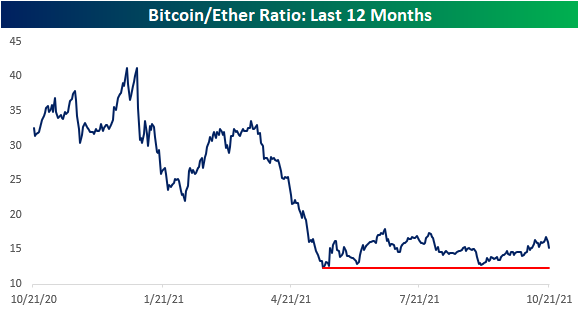