“It is clearly now the will of the parliamentary Conservative Party that there should be… a new prime minister.” – Boris Johnson 7/7/22

Just over three months ago, Boris Johnson resigned as UK PM, and now this morning, his successor, Liz Truss, just announced she will be stepping down as PM.  Do you think she had enough time even to unpack her bags?  After trading lower throughout most of the night, S&P 500 futures had flipped modestly into positive territory this morning, but in the immediate aftermath of the resignation announcement, they pulled back closer to unchanged while Nasdaq futures are lower.  Treasury yields have been behaving with nothing more than modest moves higher in yields across the curve.  Crude, however, is rallying an additional 2%+ and back above $87 per barrel while copper is also up over 2%.  Over in China, there was some positive news that the country is considering a reduction of the required quarantine time required for travelers in the country.

Here in the US, the general trend in earnings remains primarily positive, but there have been some duds.   Tesla (TSLA) is trading lower after reporting weaker-than-expected sales raising concerns over demand, and Allstate (ALL) dropped over 10% after announcing Q3 catastrophe losses of $673 million.  Lastly, Alcoa also reported weaker-than-expected EPS and sales and lowered forecasts for shipments, but anyone following the company over the years knows that it is hardly a bellwether.

In economic data this morning, Initial Jobless Claims came in lower than expected (214K vs 233K) while Continuing Claims were only slightly higher than forecasts (1.385 million vs 1.378 million).  Also, the Philly Fed Manufacturing report for October improved less than expected rising from -9.9 to -8.7 versus forecasts for a reading of negative five.

This week’s equity market performance has been the opposite of the pattern we have seen this year.  Heading into the week, the S&P 500 has averaged negative returns on every weekday this year except Wednesday when the average gain has been 0.20%.  This week, the only down day (so far) was Wednesday, and on Monday and Tuesday, the S&P 500 was up well over 1%.  While it’s still early, equity futures are once again modestly positive heading into Thursday’s trading.  There’s still plenty of time left in the week but wouldn’t that be a welcome trend? 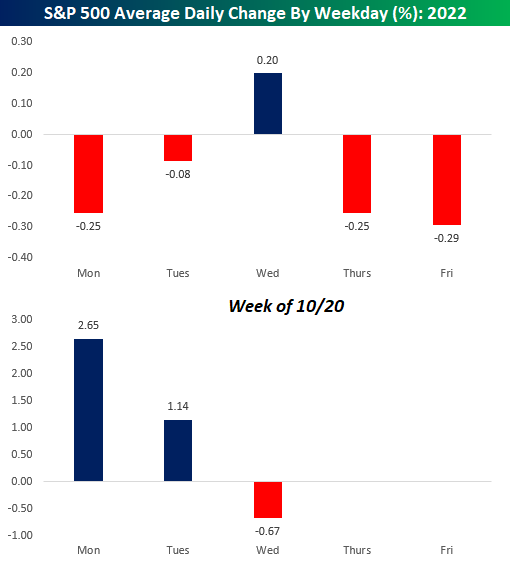