“Stone Age. Bronze Age. Iron Age. We define entire epics of humanity by the technology they use.” – Reed Hastings

There’s little movement in international equity markets and US equity futures currently, and the 10-year yield is flat at 1.63%.  There’s no economic data to speak of today, but the Beige Book will be released at 2PM eastern.  The S&P 500 has been up for five straight days now (its longest winning streak since late August) so a rest wouldn’t be too bad of a thing.

While it initially rallied after the report was released, shares of Netflix (NFLX) quickly reversed in after-hours trading and are now looking at a loss of about 2% in the pre-market. While subscriber growth numbers came in better than expected, growth in North America looked a little more sluggish raising questions (again) that the streaming service has reached the saturation point in the United States.

Similar to the illustrations we provided of the large banks last week, the chart below shows the performance of NFLX since the start of 2020 with red dots indicating the closing price on the company’s earnings reaction day.  What’s looking like a decline of around 2% for NFLX today would mark the seventh time in the last eight quarters where NFLX declined in reaction to earnings, and in each case, it has been a similar story; either sub growth was weaker than expected or investors anticipated that North American sub growth going forward would slow.  Despite the short-term pessimism around each quarter’s report, since the start of 2020, NFLX has risen about 97% which is more than double the 44% gain of the S&P 500. 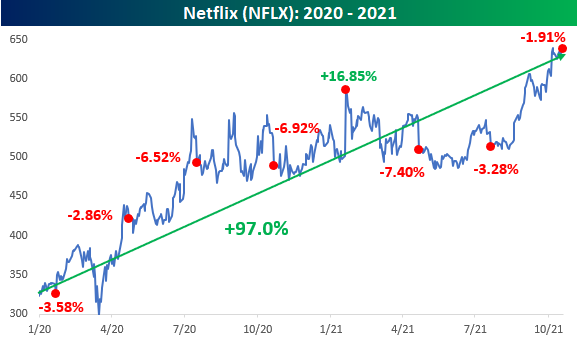