“Just before you break through the sound barrier, the cockpit shakes the most.” – Chuck Yeager

Let the games begin.  Today marks the unofficial start to earnings season as the major banks come out of the gate with what have generally been positive results.  Of the seven banks reporting, five exceeded EPS forecasts, one (Morgan Stanley) missed and one was inline (US Bancorp).  Besides the Financials, UnitedHealth (UNH) also reported and topped forecasts on both the top and bottom lines.  It’s still early, but so far, no major disasters.  JPMorgan Chase (JPM) is even poised to trade higher in reaction to earnings which, if it holds, would be something it hasn’t done in over two years!

Outside of earnings, it’s a busy day for economic data this morning with Retail Sales (mixed relative to expectations), Import Prices (lower than expected), Business Inventories, and Michigan Sentiment all on the docket between now and 10 AM.  If that wasn’t enough, we’ll also hear from three different Fed officials (George, Cook, and Waller).  So much for a quiet Friday.

In international news, the German economic ministry said that a recession likely started in Q3 and will last for three quarters.  The political situation in the UK continues to be a mess as PM Truss will reportedly reverse her tax plans and allow the corporate tax rate to increase while at the same time sacking her finance minister.  That news has pushed the yield on the 10-year gilt down 23 bps and below 4%.

US Futures are still in positive territory, but they are well off their highs, and if the last several weeks have told us anything, it’s that where the market starts the day and where it finishes usually varies widely.

75 years ago today, Chuck Yeager accomplished the ‘impossible’ becoming the first pilot to ever break the sound barrier.  Up until that time, the thought among ‘experts’ was that once an aircraft approached the speed of sound it would break apart resulting in the death of the pilot. Not really the way anyone wants to go out.  Yeager proved the experts wrong, but in the moments leading up to that point, he remarked that the cockpit of the aircraft starts to shake violently.

Based on Yeager’s description, the market looks like it’s trying to break its own sound barrier.  After trading up over 1% in pre-market trading yesterday, the stronger-than-expected CPI erased all the gains and more.  Shortly after the open, the S&P 500 had dropped nearly 4% from its pre-market highs before staging an epic rally of over 5%.  Even in this ‘all or nothing’ type of market environment, reversals of that magnitude are rare. 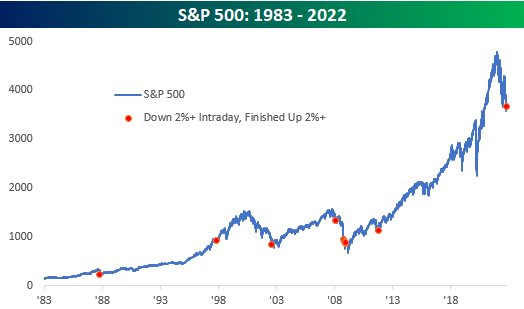 We’re not sure when or where the ultimate bottom in stocks will end up, but violent moves like yesterday tend to occur closer to lows than highs.  It’s easy to remember the good parts of a bull market where stocks rally, but people usually forget that long-term rallies emerge out of chaos where investors become increasingly convinced that the only viable path if any exists at all, is lower. The early days of bull markets feel like anything but a sure thing.