“Inflation is the crabgrass in your savings.” – Robert Orben

Futures were higher most of the night but really picked up steam in the last hour following reports out of the UK that the Truss government was looking to reverse some of its recent tax proposals.  In reaction, gilt prices are rallying, the pound is surging, and equity futures around the world have rallied.  Now, if only the CPI report would cooperate.  The pace of earnings is starting to pick up and this morning we got better-than-expected reports from Blackrock (BLK) and Taiwan Semi (TSM), while Delta (DAL) and Domino’s (DPZ) missed on the bottom line.

Weaker-than-expected CPI reports have become endangered over the last several months as economists just haven’t been able to keep up with the rapid increase in prices.  Heading into today’s report for September, there have only been three reports in the last two years where headline CPI came in lower than expected and just one in the last year.  In both cases, the 12- and 24-month totals have been at or near record lows.  The average 12 and 24-month totals of weaker-than-expected reports have been 8 and 4, respectively, indicating that two-thirds of the time consensus forecasts are either at or below the actual reading.  Simply put, economists have historically underestimated inflation, but the recent degree of underestimating price increases has been unprecedented to the point where betting on a higher-than-expected report has been nearly as bankable as it used to be taking the over in the NBA all-star game. 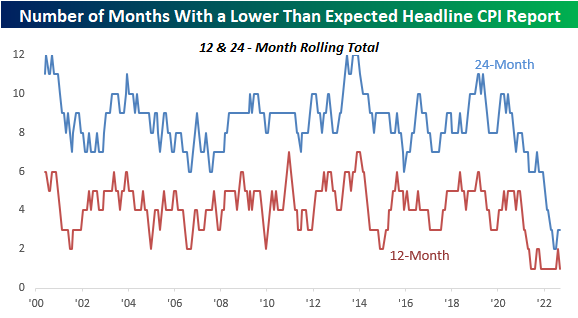