“Grow or die, that’s what I believed, no matter the situation.” – Phil Knight, Shoe Dog

With earnings season kicking off in earnest this morning, the above quote is probably the mantra of most CFOs of public companies.  If you can’t show growth, kiss your stock price goodbye.  Thankfully for the market this morning, the results we have seen so far as of this writing have been positive.  With the exception of Fastenal (FAST), which reported inline EPS and AZZ, which missed revenue forecasts, every other company that has reported this morning has topped both EPS and revenue forecasts.  Sure, it’s only eight companies, but it’s a good start.

Be sure to check out today’s Morning Lineup for a rundown of the latest stock-specific news of note, market performance in the US and Europe, major earnings releases, economic sentiment, trends related to the COVID-19 outbreak, and much more.

Outside of the US, emerging market equities have generally lagged the S&P 500, but in the recovery off the September lows, emerging market equities have the distinction of taking out their early September highs before the S&P 500.  Not only that but just yesterday, the Emerging Market ETF (EEM) managed to also make a marginal new 52-week high as well.  If it can build on those gains in the days ahead, the breakout will be confirmed. 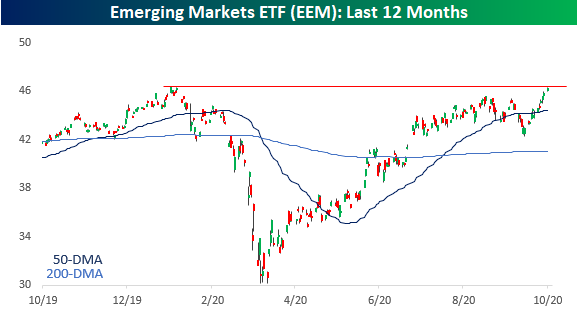 Speaking of breakouts, EEM has essentially been range-bound for the better part of thirteen years.  Since making an all-time high in 2007, EEM has seen multiple rallies to the low to mid-$50s area only to pull back.  EEM closed yesterday at $46.23, so it’s nowhere near testing resistance at multi-year highs yet, but it’s something to keep on the radar.  When and if it makes new highs in the months ahead, it will mark a notable long-term breakout more than a decade in the making. 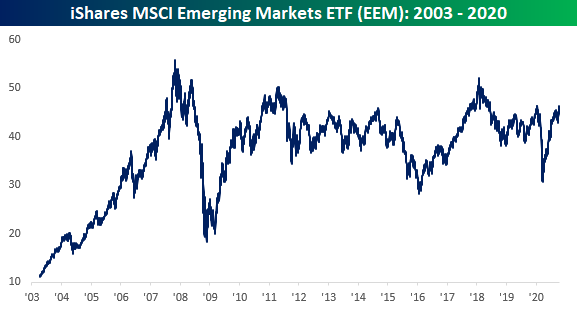