“It is well that war is so terrible, or we should grow too fond of it.” – Robert E. Lee

The big news item of the day will be the September PPI which is being released as we type this, and the results were not all that good.  Headline PPI came in at 0.4% versus forecasts for an increase of 0.2%.  Core PPI was in line with forecasts at 0.3%. On a y/y basis, the headline reading came in at 8.5% versus forecasts for an increase of 8.4%.  Y/Y Core PPI was actually slightly weaker than expected at 7.2% versus forecasts for 7.3%.  Futures were higher heading into the print along with US Treasury yields as the 10-year trades back up near 4%, but equities have now given up nearly all of their gains in the immediate aftermath of the report.

Pepsi (PEP) reported better-than-expected earnings and sales and also raised guidance this morning, and the stock is trading 2.5% higher in response.  Today is really just the warmup for tomorrow, though, when we’ll get the release of CPI and banks will kick off the Q3 earnings season. In the meantime, keep an eye on the UK as officials there can’t seem to make up their minds on how long they intend to support the gilt market.

With the S&P 500 down five days in a row, the number of down days this year continues to pile up. Through Tuesday’s close, the S&P 500 has traded down on 56.9% of all trading days.  That may not sound all that extreme, but since the five-trading day week began in late 1952, this year is currently on pace to have the second-highest percentage of down days in a given calendar year.  The only one with a higher percentage of down days was 1974 (58.3%) when the S&P 500 was down 29.7% for the calendar year.  Barring a major reversal in Fed policy, which is only taking on an increasingly hawkish stance even as economic activity shows signs of weakness, 2022 could end up in the record books. 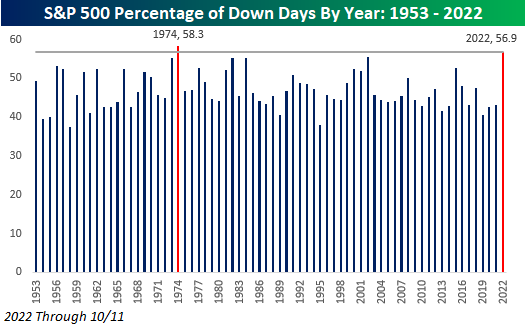 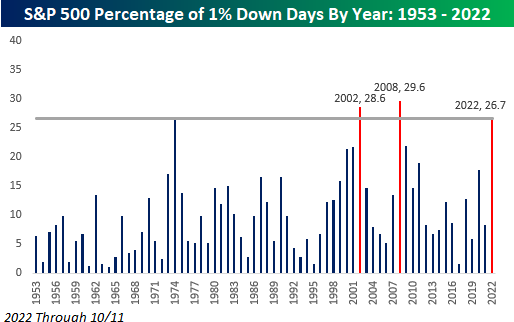