“As an investor, my job is to figure out what will happen rather than what should happen.” – David Einhorn

It wasn’t looking like a positive start to October earlier this morning as futures were significantly lower, but beginning at 6 AM we started to see a turnaround following positive trial results from Merck (MRK) regarding its oral anti-viral COVID treatment.  The thought of being able to simply pop a pill to significantly reduce the chances of an adverse reaction to COVID would be a big step in returning back to normal.

Given the volatility and sell-offs we’ve seen during the regular trading session this week, there’s still a real possibility that these early gains don’t hold, but at least this morning we’ve seen futures strengthening from low levels throughout the morning rather than the opposite of weakness from higher levels.

As far as closing acts go for a quarter, Q3’s exit was one to forget.  Over the last week of the month, the S&P 500 dropped 3.18% for its worst final week of September since 2003 when it dropped by a similar amount.  In the S&P’s history, there have been thirteen prior years where the index dropped more than 2.5% in the final week of September, and we have highlighted each of those years below.

Looking ahead to today and the first week of October, weak finishes to September have historically been followed by a weak first day of October.  In the thirteen prior years shown, the S&P 500 dropped by an average of 0.19% (median: -0.60%) on the first trading day of October with positive returns just under a third of the time.  Based on the turnaround we have seen in futures this morning, we may be on pace to buck that trend today. 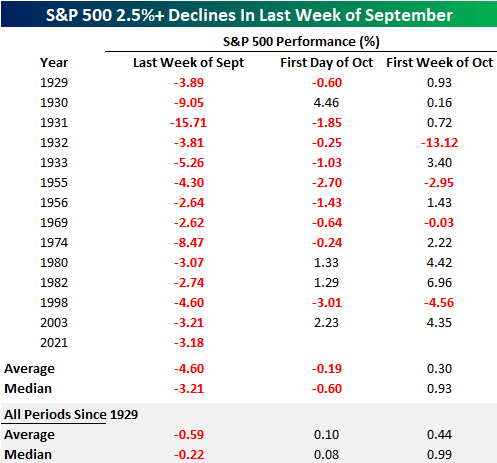