“The telegraph would bind man to his fellow-man in such bonds of amity as to put an end to war.” – Samuel Morse

In what has been an overall trend of weaker economic data, the monthly non-farm payrolls report has been an oasis.  Heading into this morning’s report, the headline reading had come in better than expected for a record eight straight months, and this morning’s stronger-than-expected report extends the streak to nine.  The only notable current streak we can think of that has gone longer is the 11 unsuccessful votes to elect a Speaker of the House. 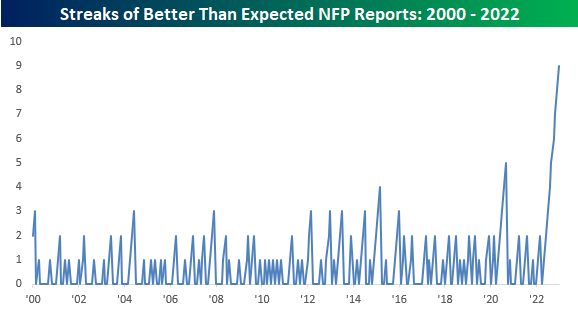 While the headline reading has enjoyed a record streak of better-than-expected readings, the trend heading into this month and which still remains in place is one of weaker momentum. As shown in the chart below, while readings have been positive for the last two years, they have generally been trending lower.  Combining the streak of better-than-expected readings with the actual readings in the total number of jobs created, economists were correct in forecasting a slowdown in job growth, but they overestimated the pace of it.

Not only that, but average hourly earnings and the length of the average workweek both came in weaker than expected.
Heading into this morning’s report, other indicators of employment that we saw earlier this week, including the ADP Private payrolls and jobless claims, investors were gearing up for a hot number this morning.  The fact that the headline reading only came in 20K above expectations and that wage growth was weaker than expected are both modest positives. 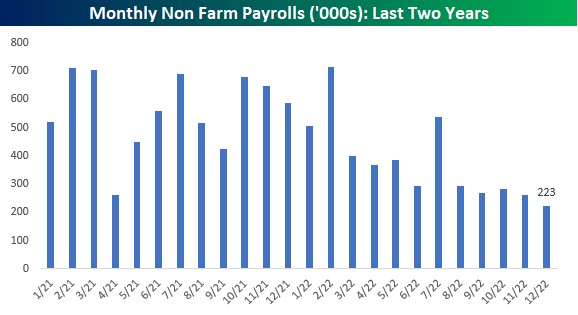