“Just because the tide is out, doesn’t mean there is less water in the ocean.” – Seth Godin

Markets are attempting to regroup from the fourth worst market reaction to a release of the FOMC Minutes since at least 2007.  In what has become a trend of the new year, S&P 500 and Dow futures are both modestly higher while the Nasdaq is lower. Crude oil is pushing $80 and the yield on the 10-year is pushing 1.8%.

In economic data, jobless claims were just released, and while initial claims came in just slightly ahead of forecasts, continuing claims topped 1.7 million which was nearly 100K above forecasts.

Look at the chart below. It may look like an EKG of someone watching the market yesterday with the increased amplitude coinciding with the release of the Fed minutes, but it’s actually the rolling three-day performance spread between the Technology and Financials sector since the start of 2018.  With Technology down 3.3% YTD and Financials up 2.6%, the performance spread between Technology and Financials currently stands at -5.9 percentage points which is the widest gap between the two sectors since almost exactly a year ago today on 1/6/21 which also happened to be three trading days into the new year.  Guess which year the headline, “Pandemic Tech Bubbles Echo Those of Dotcom Era,” was from?  It was last year. Even the headlines now are similar to that point a year ago.

Technology had a rough start to 2021, but by the end of the first quarter, it started to rebound and perform in line with to better than the S&P 500. That doesn’t mean history will repeat itself, but in the last several years, there have been more than a few premature obituaries that were written for the Technology sector.

Maybe more concerning than tech’s underperformance over the last few days has been the fact that two years after the pandemic, not only are we still dealing with it, but market volatility within sectors remains much more elevated than it was pre-pandemic. What we can take some solace in is the fact that even as the bubbliest areas of the market have cratered, the last couple of days notwithstanding, the rest of the market has held up relatively well. 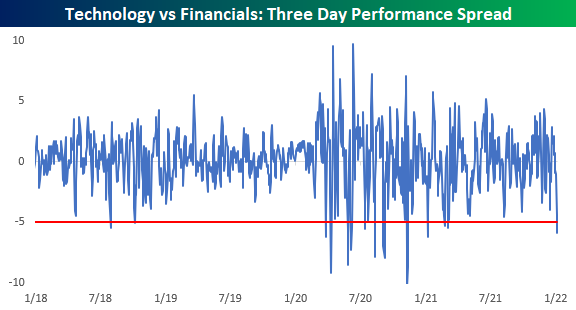