“Yet we still live in a troubled and perilous world. There is no longer a single threat. There are many. They differ in intensity and in danger. They require different attitudes and different answers.”– Lyndon B Johnson

Investors are waking up to a bit of – dare we say it – goldilocks this morning as commodity prices and treasury yields are both lower and economic data out of Europe has been positive.  Service sector PMIs for the Eurozone and each of the largest economies in the region have come in better than expected while some inflation-related reports have come in lower than estimates. Import Prices in Germany for the month of November dropped more than expected (-4.5% vs -1.6%) and French CPI for December unexpectedly declined.  In response, futures are modestly higher heading into what is likely to be an eventful day with ISM Manufacturing and JOLTS at 10 AM, and the FOMC Minutes at 2 PM.

It wasn’t a particularly great year for financial assets anywhere across the spectrum in 2022.  The only area to buck the trend was Energy.  To start off 2023, though, Energy has been among the weakest areas as WTI opened the year with a decline of 3.9% on Tuesday (and is down an additional 3%+ this morning).  With that decline, the Energy sector tumbled 3.5% (and is down another 1.5% in the pre-market).

The chart for WTI doesn’t look particularly encouraging.  After making a lower high last June, the sector has been in a relatively consistent downtrend for more than six months, and a key trend since that peak has been multiple occurrences where the sector tried to rally back above its 50-DMA but failed.  The last week has been the most recent example. After failing to take out its 50-DMA yesterday, WTI’s plunge yesterday was its largest decline to kick off a new year since 2007. 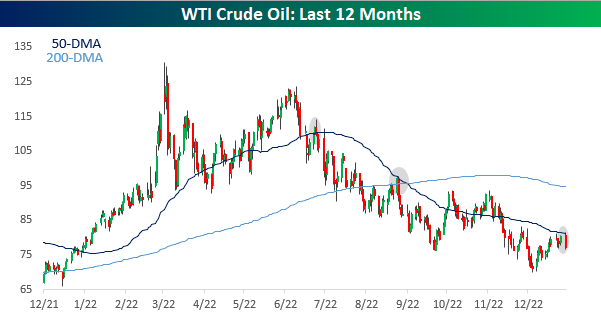 Even as oil prices have plunged from their 2022 highs, Energy stocks have held up impressively well.  It was only back in mid-November that the Energy sector made a new high for the year while oil prices were well off their highs.  Despite the outperformance, the sector’s technical picture has deteriorated.  November’s peak was technically a higher high, but it’s starting to look more like a double-top.  The fact that after trading below its 50-DMA in early December, the Energy sector has had multiple failed attempts to trade back above that level is a concern for longs.  Like crude oil, Tuesday’s 3.6% decline was the weakest opening-day performance for the sector to start a year since 2007. 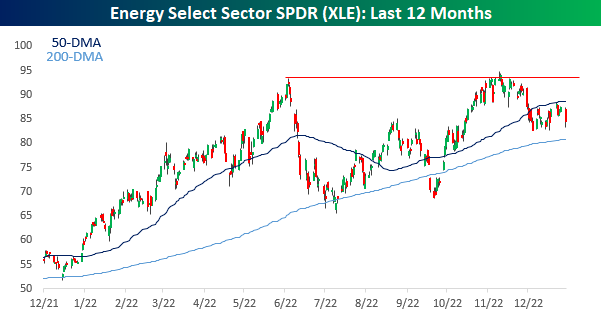