It’s a new year but it’s looking like the same old market as positive futures drift off their highs into the opening bell.  With treasury yields sharply lower, crude oil and natural gas also lower, and foreign equity markets firmly higher to kick off the year, it’s a positive backdrop for equity bulls to start the year.  After a quiet week data-wise to close out the year, things will pick up this week with Construction Spending, ISM, and an Employment report all headlining the calendar on this shortened week.

So, how important are these first impressions in terms of the remainder of the year?  For all years since 1994, when SPY had a larger than average opening gap to start the year, its median performance from the open on the first trading day of the year through year-end was a gain of 13.93% with positive returns 82% of the time.  That’s nothing to sneeze at, but it’s actually right in line with the historical average for all years since 1994.  On the other hand, in the four years when SPY gapped down to start the year (1996, 2014, 2016, and 2019), its median performance for the remainder of the year was 18.3% with positive returns all four times. 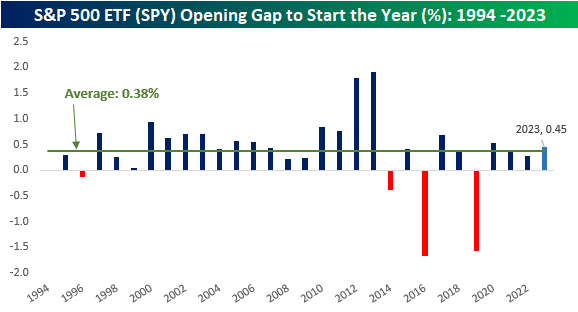