“Beware of false knowledge; it is more dangerous than ignorance.” – George Bernard Shaw

Shares of GameStop (GME) are trading up over 50% in the pre-market, and while that may sound ludicrous, earlier this morning they were up well over 100%!  The pre-market rally lin GME lost its steam following a CNBC report that Melvin Capital completely exited its short position on Tuesday afternoon.  The crying uncle of one of the most notable shorts on GME would presumably mark the peak of this surge, but then again, no one would have really predicted that things would have gone this far to begin with.  It’s interesting to note that much of the moves in GME have been driven by options trading, so when those markets open at 9:30 things could get a lot more interesting.

From GME, where will things go next?  Was this just a one-shot deal, or will the traders that originally targeted GME move on to other targets?  From a broader market perspective, though, it’s hard to look at what’s going on in the market right now and frame it as a positive.  Also, keep in mind that today is an FOMC meeting day, and while there will likely be no changes to policy, we can guarantee that the subject of GME will come up in the 2:30 press conference.

Be sure to check out today’s Morning Lineup for updates on the latest market news and events, earnings reports from around the world, Economic data out of Europe and Asia, an update on the latest national and international COVID trends, and much more.

Yesterday, we showed a version of the table below showing the performance of the most heavily shorted Russell 300 stocks as of the end of 2020.  As we noted, heading into yesterday’s session GME was up an incredible 307%.  The other stocks were also doing well with every single one of them up at least 10% and half of them up over 50%.  Since we published that list, the performance of these stocks has only gone much higher.  Through yesterday’s close, the 16 stocks listed below are up an average of 96% while the median gain is still an incredible 58%. Along with GME, Bed Bath and Beyond (BBBY) and SunPower (SPWR) have also doubled since the start of the year. 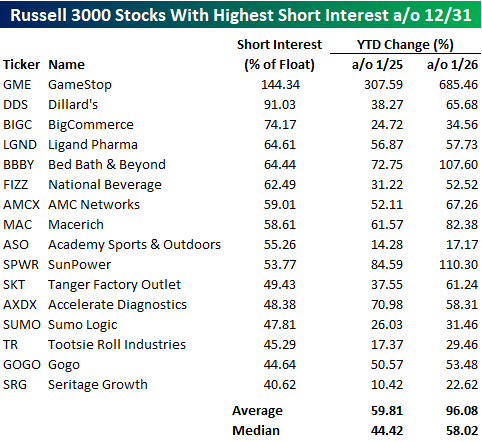