“Every once in a while, the market does something so stupid it takes your breath away.” – Jim Cramer

We’re continuing to see some crazy moves in the market once again this morning.  Take a recent tweet from Elon Musk where he said that he ‘kinda’ loves Etsy.  In reaction, the stock is up over 8% in the pre-market.  Etsy has a market cap of about $25 billion, so that tweet alone was worth about $2 billion.

Elsewhere in the markets, US futures are higher on the heels of a rally in Europe.  The overnight pattern heading into this morning is the complete opposite of yesterday.  Whereas yesterday it was Europe that was trading lower after a strong session in Asia, today its Europe rallying after a so-so Asia session.

Be sure to check out today’s Morning Lineup for updates on the latest market news and events, earnings reports in Asia and Europe, Economic data out of Asia, an update on the latest national and international COVID trends, and much more.

Shares of GameStop (GME) are up another 19% in the pre-market this morning, and while a move like that in what just a few weeks ago was considered a washed-up company would normally raise eyebrows, but after the insanity we’ve witnessed in the stock over the last few days, today’s move is nothing.  While this year’s moves in GME have been the biggest outlier, it’s part of a broader trend where traders have been targetting stocks with the highest short interest. 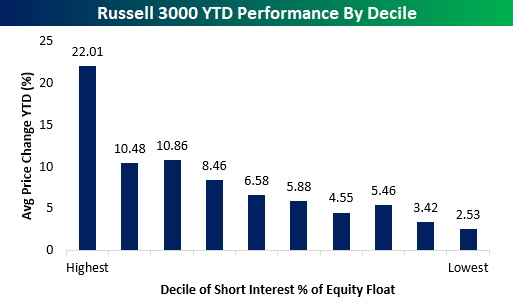 So, which stocks make up this basket of most heavily shorted stocks? We don’t have enough space to list all of them, but in the table below we show the 16 stocks in the Russell 3000 that had more than 40% of their float sold short as of year-end.   Topping the list is GameStop (GME) which had more than 100% of its float sold short as of year-end.  Year to date, that stock is up an incredible 307%.  The other stocks, however, haven’t been slouches either.  Every single one of them is up at least 10% YTD, and half of them are up at least 50%.  50%!!!! 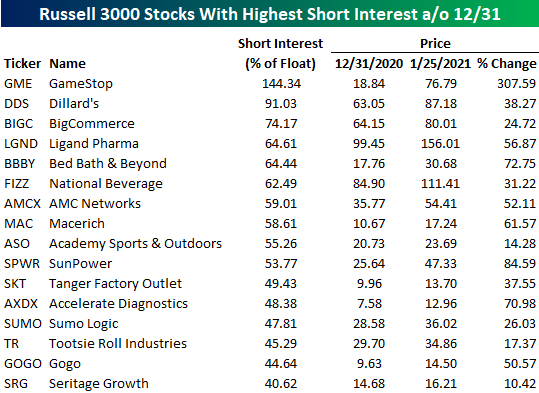