What a difference a few months makes.  It was only six months ago that Intel (INTC) was starting to be considered an also-ran in the semiconductor space.  After a number of management shakeups and production issues in its rollout of chips using 10nm technology, INTC was losing market share to AMD, and the stock languished. When the company reported earnings last July, its stock declined 1% in reaction to the report.  While that wasn’t a sharp decline, it was the fifth time the stock had reacted negatively to earnings in the prior six quarters.  Not only that, but the stock was also near 52-week lows when the Philadelphia Semiconductor Index was near 52-week highs. INTC used to be the leader in the semiconductor space, but last July it seemed to be looking more like Bethlehem Steel in the early 1990s than a leading company in the technology sector.

That report last July marked what was a low point for INTC on a relative basis, though. Ever since then the stock has been rolling, and even before last night’s earnings triple play the stock was already in the midst of a multi-year breakout that will likely look even more convincing after today. In pre-market trading, the stock has been losing some steam from its overnight highs, but it is still up over 5% after what was already a strong move heading into the report. 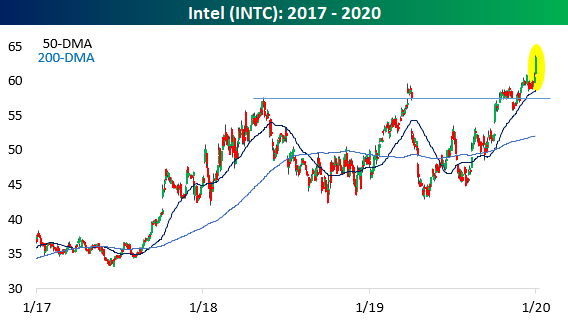