The coronavirus is increasingly starting to show up around the world today, and authorities are taking additional steps to contain its spread. Travel has not only been restricted into and out of the city of Wuhan but has reportedly been expanded to other cities as well.  Additionally, as we type this Singapore just announced its first confirmed case. Macau has even announced that all parties and festivities tied to the New Year celebration have been canceled, and the CEO of WYNN has said that they will not rule out closing its casinos on the island.  Imagine if New York city just canceled the Times Square ball drop on New Year’s Eve?  Even if the outbreak is contained, already it is having an economic impact.

Remember back in 2008 during the Financial Crisis when no one wanted to go home long on a Friday and risk a negative news event coming out over the weekend?  Well, that’s the case in China now as the Shanghai Composite fell nearly 3% ahead of the week-long Lunar New Year holiday.  With the coronavirus continuing to spread and no one knowing how the great migration in China during this holiday period will impact the spread, it is only natural that traders looked to lighten up in what will be their last chance to trade until next Friday.

While it’s only natural, today’s drop was the Shanghai Composite’s worst one-day decline on the last day of trading heading into the Lunar New Year holiday on record.  While the last few days have been a downer for Chinese stocks, the uptrend from last summer’s lows remains intact, and if the steps being taken in China to contain the virus are successful, those sales will quickly turn into buys when traders come back next week from the holiday. 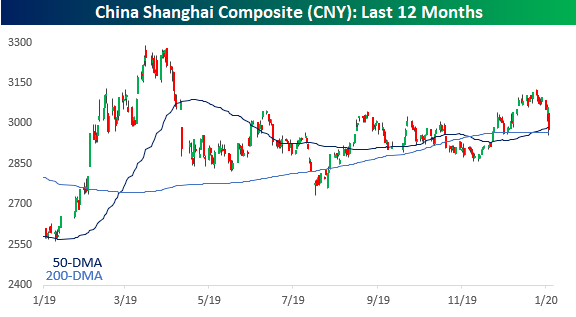