After reporting better than expected subscriber growth and announcing it would consider stock buybacks, Netflix (NFLX) looks like it will fittingly be the first blockbuster earnings report of the Q4 reporting season as the stock is trading up over 13%.  That gain has Nasdaq futures trading up nearly 1% while the S&P 500 and Dow futures are positive but not by nearly as much.  In other earnings news this morning, all nine of the companies reporting have topped EPS forecasts while seven out of nine have also topped revenue forecasts.  Two companies (ASML and Procter & Gamble) even raised guidance.

Economic data this morning is relatively light as the only notable report on the calendar is homebuilder sentiment at 10 AM.  Economists are forecasting the headline index to remain unchanged at last month’s reading of 86.  The big event of the day will obviously be the inauguration of Joe Biden as the 46th President of the United States at noon eastern time and the flurry of Executive Orders concerning student loans, eviction moratoriums, the Keystone Pipeline, the travel ban, and mask-wearing on Federal property that are expected to immediately follow.

Be sure to check out today’s Morning Lineup for updates on the latest market news and events, Chinese Industrial Production, an update on the latest national and international COVID trends (which were positive again), and much more.

Today makes it official for Joe Biden as he will be sworn in as the 46th President of the United States.  With that in mind, the table below summarizes the performance of the DJIA for every US President since 1900.  In terms of gross percentages, the DJIA’s 56.0% gain under Donald Trump’s tenure ranks as the 8th best out of the 20 shown.  While that performance seems pretty middle of the road, all seven of the Presidents that oversaw larger gains did so over more than one full-term. To account for each President’s time in office, in the rightmost column, we show the DJIA’s performance on an annualized basis, and on this basis, the 11.8% gain during the Trump Administration ranks as the fourth-best behind Coolidge (25.5%), Clinton (15.9%), and Obama (12.1%).

We all remember the big market rally we saw after the 2016 election with Trump’s election when the S&P 500 rallied more than 6%.  As impressive as that gain was, it pales in comparison to the current period where the S&P 500 is up nearly 12% since the election. 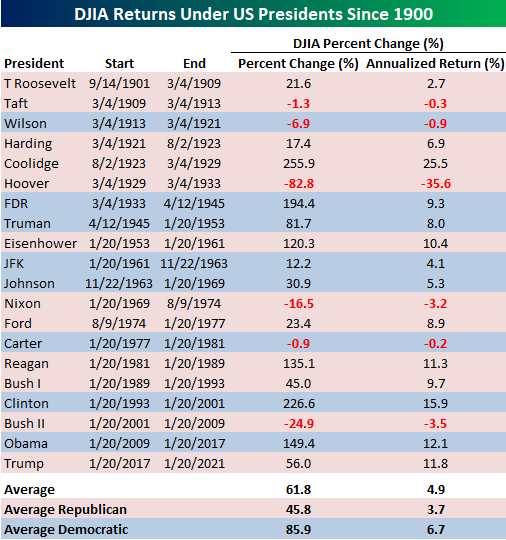 Turning our attention back to Netflix (NFLX), with the stock set to gap up over 13%, today will be the largest upside gap for the stock since October 2016 and the 14th upside gap of 10%+ for the stock since 2010.  In the table below, we summarize each of the prior instances along with how the stock performed from the open to close.  NFLX has continued higher over three-quarters of the time with an average gain of 1.05% (median: 1.84%).  Also notable is the fact that all but one of the stock’s prior upside gaps was an earnings-related move.  The only exception was in August 2015 during the volatility of the China yuan devaluation.  That was also the time the stock saw the largest downside move from the open to close.