Despite an extra day off, the equity market is not looking like it’s going to get off to a good start to the trading week with futures on the major averages all lower.  After outperforming the S&P 500 last week, the Nasdaq is leading the charge lower this morning with a decline of over 1%.  The culprit this morning, as it seems to be every day, is interest rates as the yield on the 10-year tops 1.8% and the 2-year yield moved back over 1%.

On the earnings front, reports so far this morning have been mixed, but the most high-profile report so far has been Goldman (GS) which actually missed EPS forecasts and is trading down over 5%.  It’s not looking like a positive start to the shortened week, but at least it’s Tuesday already.

Lastly, in just announced news, Microsoft (MSFT) is planning to acquire Activision Blizzard (ATVI) for $95 per share in cash. On the economic side, the Empire Manufacturing report for January came in much weaker than expected falling to -0.70 versus December’s reading of 31.9.  That was the largest m/m decline since the early days of the pandemic in April 2020.  This report comes on the same day the markets are now pricing in a 100% chance of a 25 bps rate hike in March and even a slight chance for 50 bps!

The Nasdaq 100 tracking ETF (QQQ) is set to open down over 1% this morning which would be the fourth downside gap of at least 1% over the last 50 trading days.  The way the Nasdaq has been trading lately, we were actually surprised that the number of downside gaps wasn’t higher.  In any event, the rolling number of downside 1%+ gaps for QQQ is now at the highest levels since last July, but still just a fraction of the pace we saw during the COVID crash.  Over the last five years, there have been 77 prior downside gaps of 1%, and on those days, the median change from the open to close for QQQ has been a gain of 0.30% with positive returns 57% of the time.  However, when those downside gaps occurred on the first trading day of the week (Monday or Tuesday), the median change from the open to close was actually a decline of 0.08% with gains just half of the time. 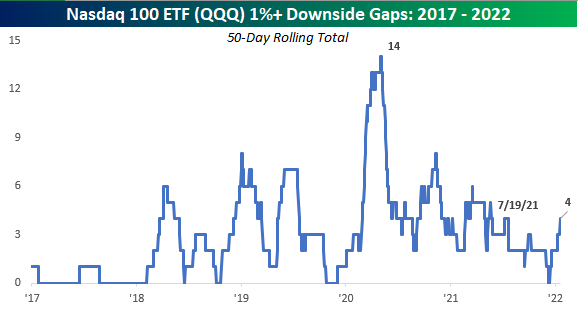