“When you expect things to happen – strangely enough – they do happen.” – J.P. Morgan

If you were hoping for a quick bounceback following yesterday’s decline, think again.  While futures were higher overnight, all of those prior gains have evaporated.  Tech is leading the way lower once again, but Financials aren’t providing any support as investors have generally been selling JP Morgan (JPM), Wells Fargo (WFC), Citigroup (C), and Blackrock (BLK) following their reports.  The only one of those four that’s higher this morning is WFC, while JPM and C are both down over 4%.  As noted in our Earnings Season Preview yesterday, the major financials typically react negatively to their Q4 reports, so far this earnings season doesn’t appear to be an exception.

It may be Friday, but it’s a relatively busy day for economic data to close out the week with Retail Sales, Import and Export Prices, Industrial Production, Capacity Utilization, Business Inventories, and Michigan Confidence all on the calendar.  Retail Sales just hit the tape and came in much weaker than expected.

In the entire history of the SOX dating back to the mid-1990s, there have only been 42 prior occurrences where it was up 2%+ intraday but finished the day down 2%+, and only three of those occurred in the post-Global Financial Crisis period.  As shown in the chart below, the majority of the prior occurrences came during the unwind of the dot-com bubble from March 2000 through October 2002. What makes yesterday’s reversal unique is that even after the decline, the SOX is still just 6.3% below its 52-week high.  The average distance from their respective 52-week highs of the other 42 occurrences was over 40%, and there wasn’t a single time where the SOX was as close to a 52-week high as it is now.  The only other occurrence where the SOX was even within 10% of a 52-week high was on 3/14/00. 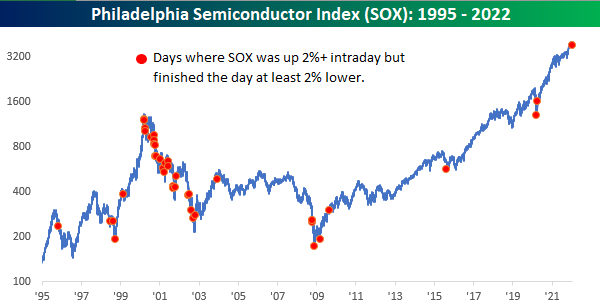