The President was impeached by the House for the second time in just over a year yesterday, and like the first time, financial markets were unfazed.  While the President’s first impeachment in the House in December 2019 was completely on a partisan basis and dead on arrival in the Senate, this time around, the fate of the impeachment in the Senate is more uncertain.  What seems certain at this point, though, is that the completion (or maybe even the start of a trial) would not take place until after the inauguration, so from a market perspective, it really doesn’t matter much.

The only economic data of note today was Jobless Claims, and both initial and continuing claims came in much higher than expected.  Initial Claims spiked up to 965K versus forecasts of 786K, and Continuing Claims rose to 5.271 million compared to forecasts for 5.0 million.  In terms of the market reaction to these much weaker than expected reports, there really hasn’t been any.

In terms of individual companies, although earnings season kicks off today with reports from BlackRock (BLK) and Delta (DAL), the pace of reports will remain slow today and tomorrow.  Regarding today’s reports, both BLK and DAL are trading modestly higher in reaction to their reports.  Also notable, although not a US company, Taiwan Semi (TSM) also reported strong results and is trading up over 2.5%.

Be sure to check out today’s Morning Lineup for updates on the latest market news and events, a discussion of the latest import and export orders from China, an update on the latest national and international COVID trends, and much more.

With yesterday’s big move in Intel (INTC), the stock is now over three standard deviations above its 50-DMA.  In the last nearly 40 years, there have only been 22 other days in which the stock was as overbought or more overbought than it is today. 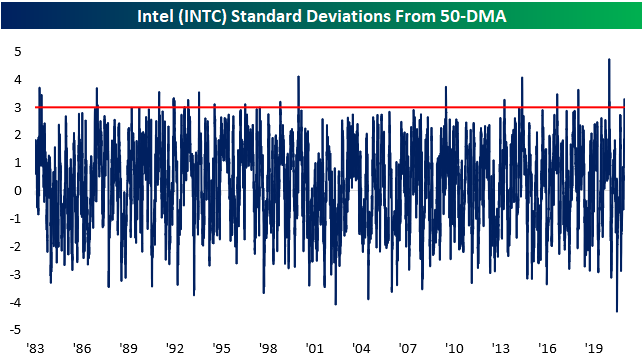