“The intelligent investor is a realist who sells to optimists and buys from pessimists.” – Benjamin Graham

We’ve had a flurry of central bank officials on both sides of the Atlantic reiterate their stances that they are in no rush to start removing accommodation from the system.  In Europe, ECB President Lagarde and council member Villeroy de Galhau both doubled down on their commitment to a 2% inflation target and that they will keep monetary policy loose for as long as needed in order to get the economy back into gear.  These comments today follow comments from Fed Presidents Bullard and Rosengren who both also reiterated their commitments to get the economy back to its full potential.

Despite the dovish commentary, futures are modestly lower this morning ahead of the December CPI report.  Outside of that report, though, the only other report of note is the monthly Budget Statement later this afternoon.  On the political front, the House is expected to vote on impeachment again and at least some Republican members are expected to vote in favor.

Be sure to check out today’s Morning Lineup for updates on the latest market news and events, a discussion of the latest report on Machinery Tool Orders in Japan, an update on the latest national and international COVID trends, and much more.

Small-cap stocks have been on roll so far in 2021, but the real action now has been in micro-cap stocks.  Through the first seven trading days of 2021, the Russell Micro Cap Index is up 9.4% which is the best start for the index since its inception in 2007.  The only other year that was even close was in 2019 when the Micro Cap index was up 8.1% in the first seven trading days of 2021. 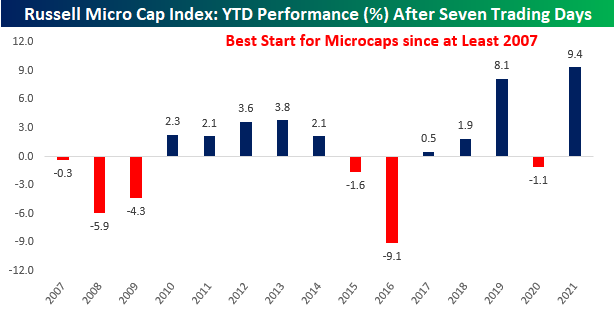 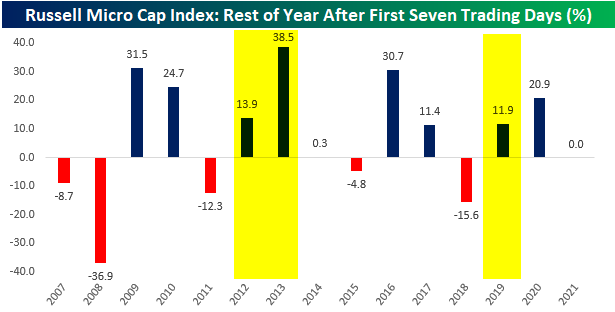