“What weather they shall have is not ours to rule.” – J.R.R. Tolkien

In weather-speak, they call an atmosphere like this morning, the calm before the storm.  Overnight in Asia, stocks were little changed and that was almost literally the case with the Nikkei rising just 0.01%.  Chinese stocks were a little more biased to the upside with a gain of 0.20%.  In Europe, the mood is considerably better as major benchmark indices in the region are all up over 0.50%.  Bond yields in the US are modestly higher, and both crude oil and natural gas are higher after the latter attempts to bounce from 52-week lows reached on Tuesday following a massive three-week decline.

None of these moves really matter, though, as the 8:30 release of the December CPI – “the most important economic release in generations” – will dictate the tone of the trading day. With the President scheduled to speak on inflation later this morning, there is some speculation that the White House got an early look at the report and is looking to spike the ball on the administration’s policies to combat inflation.

If there’s one place where hyperbole rules, it’s in discussions pertaining to the market.  We would argue, though, that the recent moves in natural gas may not have been talked about enough given how large the declines have been relative to history. 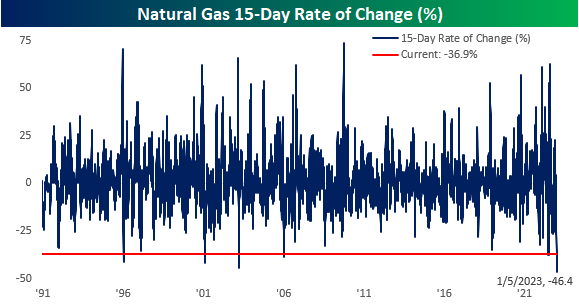 From a longer-term perspective, the declines have been just as large.  In the 100 trading days ending Wednesday, the front month natural gas future declined 59.8% which also ranks as the most extreme downside move on record. The only other times there were declines of a magnitude in the ballpark of the current drop were in 2001 and 2006. 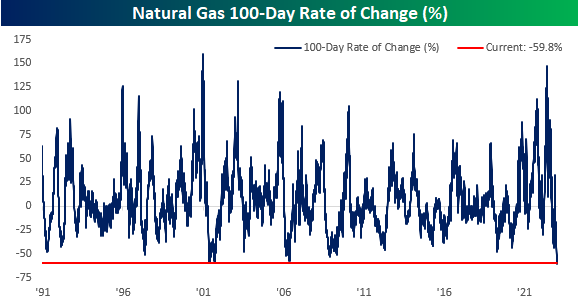 The scatter chart below compares the 15-day rate of change (x-axis) in natural gas prices to the 100-day rate of change (y-axis).  The highlighted section at the bottom left with the most extreme downside moves over both a 15- and 100-day period all occurred so far in 2023.  Whereas most other large 15-day declines followed periods when natural gas prices were up over the prior 100 trading days, the current period has been a snowball of weakness on top of weakness. 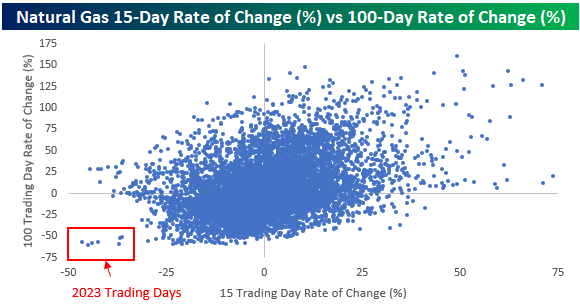