“It is a way to take people’s wealth from them without having to openly raise taxes. Inflation is the most universal tax of all.” – Thomas Sowell

The big data release of the day is December’s reading on CPI, and the results came in slightly higher than expected with headline CPI rising 0.5% m/m versus forecasts for an increase of 0.4% while core CPI increased 0.6% compared to forecasts for an increase of 0.5%.  On a y/y basis, headline CPI increased 7.0%, and as shown in the chart below, that’s the highest rate of change since 1982.

Despite the higher than expected readings, though, investors must have been expecting worse as futures have legged higher, led by the Nasdaq, in reaction to the report.

Even as it was expected to be high, the rate of increases in consumer prices for the month of December is still a chart to behold.  With the y/y change hitting 7.0%, it is the highest rate of change in CPI on a y/y basis since 1982. 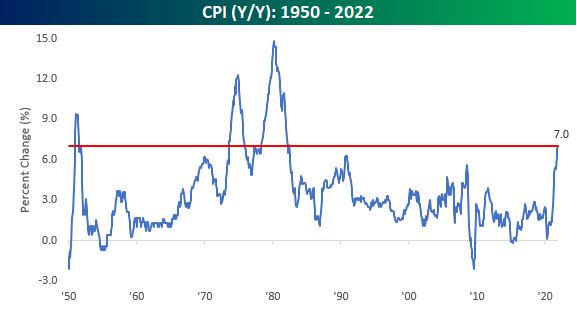 Not only are consumer prices up significantly over the last year, but the pace at which we have reached these levels is nearly unprecedented.  A year ago at this time, CPI was only rising at a y/y rate of 1.4%.  That rate of increase has now accelerated by a full 5.6 percentage points.  Going all the way back to 1951, the only other times that the rate of change in Y/Y CPI increased at a similar or higher rate were in 1951 and 1974. 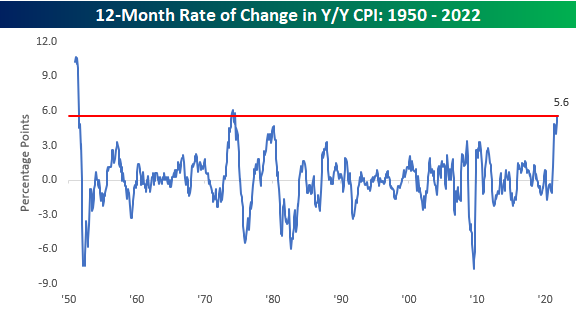