“It is easy to quit; I’ve done it at least a hundred times.” – Unknown

Flights across the US are grounded due to an outage at the FAA, but stocks remain airborne as futures are modestly higher across the board, and the Nasdaq is looking to extend its winning streak to four straight days. News flow looks to be relatively light as there are no major economic reports on the calendar, and the only earnings report is KB Home (KBH) after the bell.  Tomorrow will be the big day of the week, though, when the December CPI will be released at 8:30.  Then, on Friday we’ll start to get the first of the big earnings reports from the major banks.

Back on this day in 1964, the US Surgeon General issued a report on smoking that was thought to be so damaging to the tobacco industry that he waited until a Saturday when markets were closed to release it to limit the potential stock market chaos.  The day after the report was released it was front page top of the fold news in the New York Times with a headline reading “Cigarettes Peril Health” and the sub-headlines “Cancer Link Cited” and “Smoking Is Also Found Important Cause of Bronchitis”.  Besides the front-page headlines, the Sunday edition was rife with stories on the ‘revelation’ that smoking wasn’t good for you.

As much as the tobacco companies tried for decades to convince consumers otherwise, anyone with a minimal amount of intelligence who had ever smoked a cigarette probably already knew that it wasn’t something you did in order to get yourself into shape or good health. As far back as the 1940s, scientists had already made the link between smoking and lung cancer. Smoking was considered a vice for a reason!  Even as many (or most) Americans already knew of the dangers of smoking, an official statement from the Federal government was a big deal, though, and would pave the way for more regulation of the sector.  If you owned tobacco stocks heading into that weekend, you probably weren’t looking forward to Monday’s opening bell.

When the bell rang Monday morning, tobacco stocks opened lower, but by the end of the trading day, their performance was a surprise to most.  Of the five major tobacco companies at the time, Reynolds American actually finished the day higher, and American Tobacco was unchanged on the day.  Of the remaining three major tobacco stocks, none of them even finished the day down 2%.  Perhaps the most amusing aspect of the New York Times market recap the following morning was that cigar stocks traded higher on the day as  “cigar smoking received a relatively clean bill of health”.  It looks like at least one part of the industry had effective lobbyists!

The performance of the cigarette stocks on the first trading day after the Federal Government first officially recognized the dangers of smoking illustrates once again how the market can defy consensus expectations.  While the Surgeon General’s report on the dangers of smoking should have been a blow to cigarette stocks, the initial reaction to the report was muted.  When everyone is zigging, the market often zags. 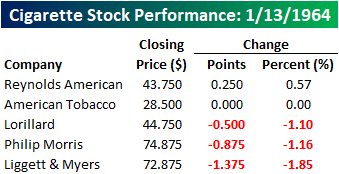