“Extinction is the rule. Survival is the exception.” – Carl Sagan

There’s a modestly positive bias to futures this morning, but the release of the December jobs report could shake things up considerably.  Like last month’s report, the data was mixed.  Non-Farm Payrolls came in considerably below forecasts at 199K versus expectations for a reading closer to 500K.  At the same time, the Unemployment Rate actually dropped below 4% for the first time in the post-COVID era.  Average Hourly Earnings grew 0.6% m/m which was better than expectations for growth of 0.4% while average weekly hours were slightly lower than estimated. Despite the stronger than expected wage growth, on a y/y basis, earnings rose 4.7%, but that’s still more than two full percentage points below the y/y rate of CPI.

We’re only a week into the year, but already the trend has been markedly different from last year.  2021 may have been one of the more bullish years for equities, but 2022 is taking a different path.  As shown in the snapshot from our Trend Analyzer below, all of the major index ETFs we track are down YTD.  While the Dow (DIA) is only down marginally, the Nasdaq 100 (QQQ) is down over 4% while small caps are down close to 3%.  In the case of the Nasdaq 100, that index is now more than two full standard deviations below its 200-DMA. 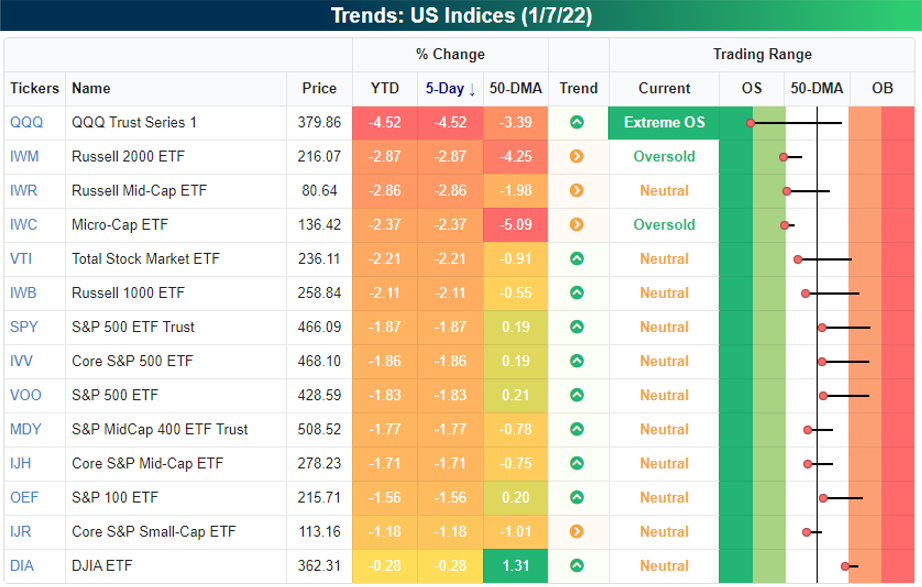 Focusing on the Nasdaq 100 in particular, last week’s decline marked the third downside test of support in the last several weeks. While the last two tests were successful, this morning could turn out to be a different story as the Nasdaq 100 is already indicated to open down by another 1.3% which, if it holds into the close, would be the lowest close since October.