“There’s nothing fair about it, it’s going to create economic hardship,” – Ryan Lance

The above quote from the ConocoPhillips (COP) CEO from earlier this year was referring to the energy policy of the United States, but it could just as equally have been used as a response to this morning’s WSJ article that the FOMC is planning on a 75 bps rate hike at its September meeting.  Whatever your views are regarding the path of inflation and whether a 75 bps hike is actually needed, the impacts will create some level of hardship on what is already a weakening economy.  Chair Powell has admitted as much in numerous comments saying that the FOMC’s fight to reverse the post-COVID inflation surge will be ‘painful’.

Futures were modestly higher before the WSJ article was published but have since reversed into negative territory with the S&P 500 indicated to open down by 0.30% with the Nasdaq indicated lower by a similar amount.  The Nasdaq is already down seven straight days, which is the longest losing streak since November 2016, and that streak ultimately went on for nine days before ending.  Crude oil prices are modestly lower and treasury yields are lower as well.

Maybe we were just overdue for a losing streak like the Nasdaq is currently in the midst of now.  Before this one, the last losing streak of seven trading days was right before the 2016 election, and the gap of 1,466 trading days between these two streaks was the longest in the Nasdaq’s history. Prior to the current period, the longest gap between 7-day streaks was from late 2001 until 2006, and the only other gap of over 1,000 trading days ended in January 2016. 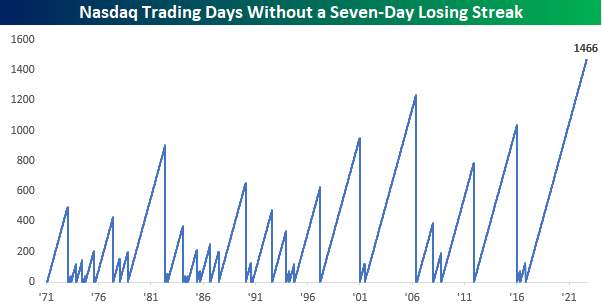