Over the past few months, we have frequently made note of how remarkably strong beat rates and guidance spreads have been for companies reporting earnings. As shown in the charts from our Earnings Explorer below, the 3-month rolling beat rate for EPS remains at record highs Similarly, the sales beat rate is well above the historic average and trending higher.  Just as with the EPS beat rate, the number of companies raising guidance also remains at historic levels. 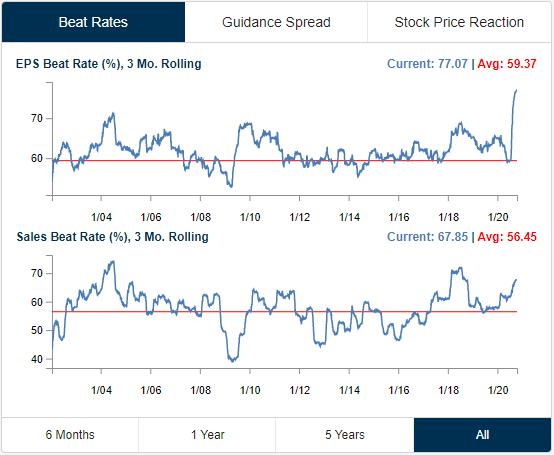 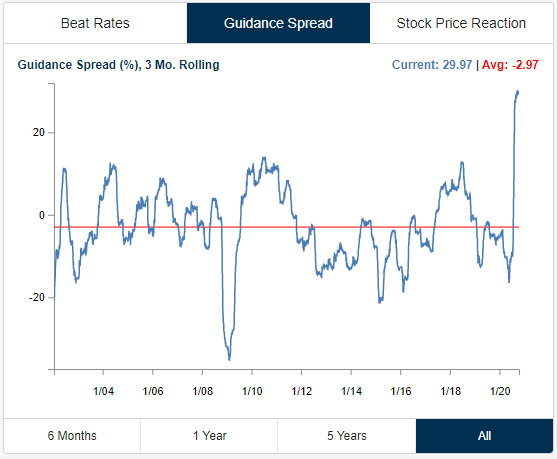 Given all of this, there has been a large number of companies reporting triple plays. A triple play is a sign of a very strong earnings report and occurs when a company reports better than expected EPS and revenues and also raises guidance.  With earnings season kicking up, there were another 8 added to the list today and yesterday alone. That is a fifth of all companies that have reported so far this week! Since the start of September, there have been a total of 30 earnings triple plays.  The bulk of these were Technology stocks though Industrials and Consumer Discretionary also have a strong showing.

Even though triple plays have been coming in at a rapid pace, the overall stock price reaction has been a bit lackluster over the past month and a half.  Only half of these stocks have seen positive price reactions to earnings with nearly two-thirds falling intraday. More recently though, since the beginning of October, reactions have been a bit more positive with an average full-day gain of 1.29% with more than half of reporting stocks seeing a positive reaction. Of all the recent triple plays, AngioDynamics (ANGO) has risen the most on earnings with a 19.4% full-day gain; the stock’s strongest reaction to earnings on record. The only other stock to see a double-digit gain in reaction to earnings has been Sleep Number (SNBR) which reported a week ago. 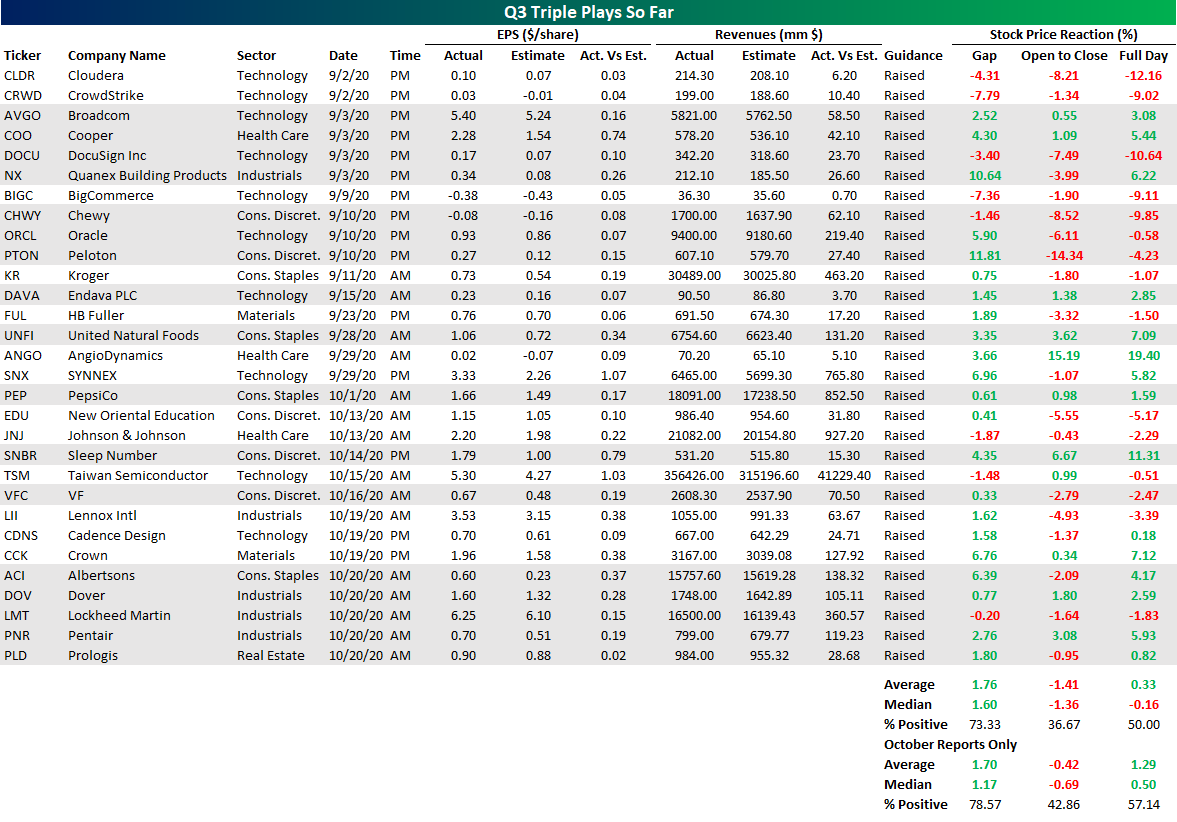 Expanding on this, in the charts below we show the average performance at the opening gap, from open to close, and over the course of the full day of earnings for all triple plays on a rolling 90-day basis. Over the past 90 days triple plays have averaged a gap up of just a little better than 3.5% at the open. That pales in comparison to the historical average of 5.19% for all 90-day periods since 2002.

While not as extreme, triple plays have averaged a small loss of 2 bps from the open to close.  Even though it is positive, it is nothing dramatic, especially compared to earlier this year.  Like the magnitude of the gap at the open, the average open to close gain is also worse than the historical average which is a gain of 0.25%.

Lastly, the rolling 90-day average full-day reaction to triple plays currently sits at a gain of 3.6%.  Once again, that is below average (5.46% gain) and around some of the lowest levels in nearly two years. In all, the weak reactions to strong fundamentals on earning reaction days creates better entry points for these types of stocks than in the past. Furthermore, jumping on the immediate reaction to earnings (when positive) has not necessarily been the most optimal strategy. 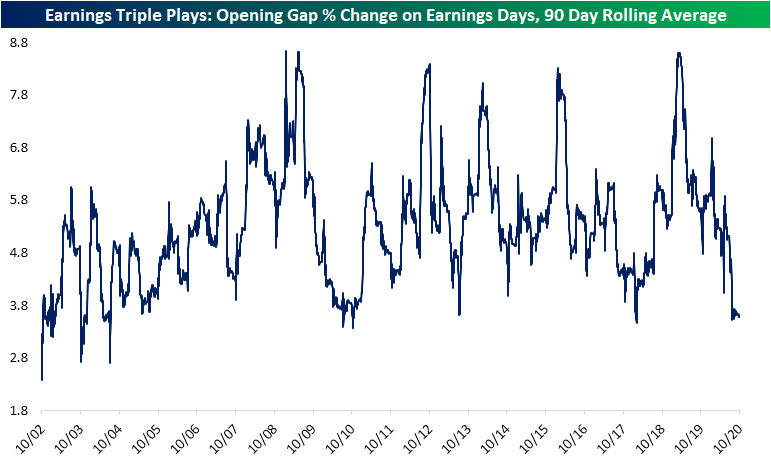 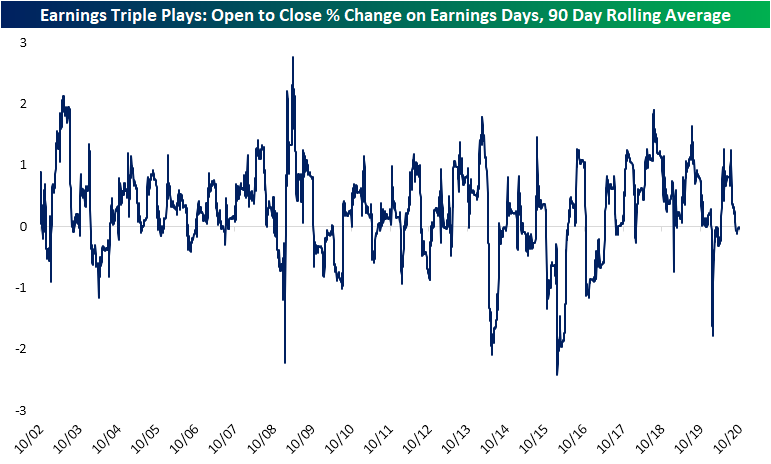 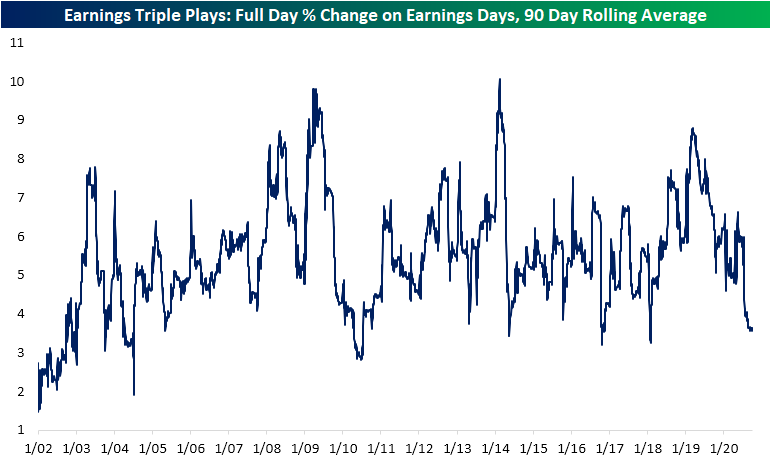 As for what this means for stocks more broadly, in the chart below we show the times in the past that the rolling 90-day full-day reaction for triple plays was as low if not lower than the current reading plotted on the S&P 500.  It’s tempting to look at weakness in stocks that report strong earnings as a negative market signal, but based on the chart below, that hasn’t been the case.  While there were a number of occurrences during the later stages of the bear market in 2001 and 2002, other occurrences have occurred at all points in the market cycle.  Furthermore, in the period leading up to the peak ahead of the Financial Crisis, there wasn’t a single occurrence within at least two years before or after that peak. 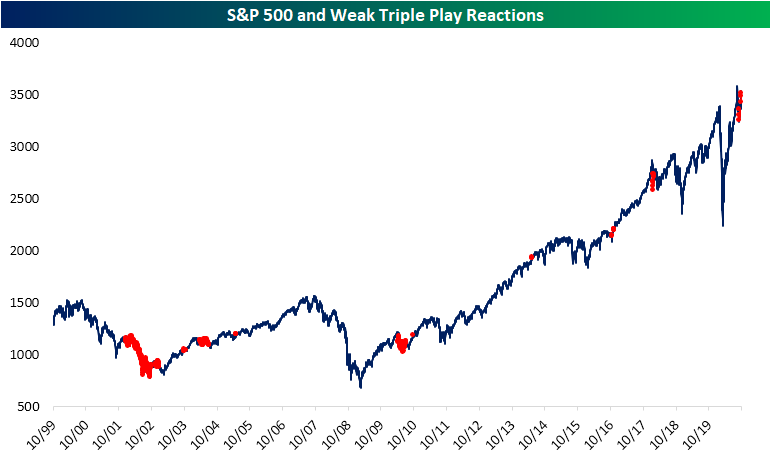