With the results from the Georgia run-off elections for the US Senate now mostly in, it looks all but official that the Democratic Party will essentially have control of the Presidency, the Senate, and the House.  As we noted in the Washington section of our annual outlook, “While individual laws or legislative proposals can, and often do, impact individual companies, the impact of DC on financial markets is over-rated.”  With that caveat in mind, in today’s Chart of the Day, we provided an analysis of market returns when the Democratic Party had full control in DC.  To read the full report, sign up for a free trial to one of Bespoke’s research offerings.

One notable aspect of the upcoming session of Congress, however, is how narrow the Democratic Majority will be in both houses of Congress.  In the Senate, the majority will come down to a tiebreaking vote, while in the house, their majority will only amount to 2.5% of all House seats.  As shown in the chart below, that will be the narrowest Democratic majority in the House since 1931!  While Democrats will likely have full control in DC in the 117th session of Congress, it’s hard to remember a time when the divide was so close down the middle as it is now. 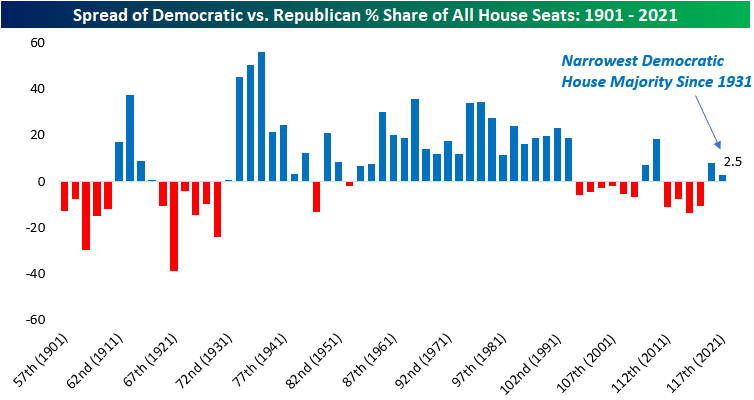