A Michigan woman tried to hire an assassin online at RentAHitman.com. Now, she’s going to prison. by Jonathan Edwards (WaPo)

A website run by a North Carolina man has served as a honeypot for those with murderous intentions for over a decade, with a Michigan woman angry at her ex-husband the latest would-be killer to be ensnared by law enforcement after requesting information from the site. [Link; soft paywall]

Hiding in plain sight: How one of the country’s most-wanted fugitives led a quiet life in Lynnfield by Emily Sweeney (Boston Globe)

A 1969 bank robbery was never solved after a teller walked out with the equivalent of $1.6mm in today’s dollars, slipping into obscurity as a resident of a Boston suburb. [Link; soft paywall]

A plot of virtual land that went for $4.3 million in The Sandbox is the most expensive metaverse property sale ever by Carla Mozée (Business Insider)

Republic Realm, a firm focused on the purchase and development of digital real estate and assets, purchased space in the Sandbox metaverse for $4.3mm this week. We wish we knew what that meant, exactly. [Link]

This explainer on the process of digital land sales offers some further explanation as to what exactly is going on with the process, but we still have many questions, not least of which being how the supply of land is constrained. [Link; paywall]

Just about everything is being turned into an NFT these days, with the iconic balloons floating above Manhattan the latest unique items being assigned an arbitrary value and slapped on the blockchain. [Link; paywall]

One of the country’s first banned books was a jeremiad against the leadership of Puritan New England’s early colonial management. The 1637 tome wasn’t the only thing its author did to enrage the other colonists. [Link]

Ford (F) is researching a new cable that would allow a massive dump of electricity into a vehicle battery and turn a charging stop into the same layover time as a gas station visit in an ICE vehicle. [Link]

Semiconductors which find their way into new cars are finally becoming easier to lay hands on as major suppliers reported higher inventories for the first time in at least 9 months during the month of September. [Link]

DNA is a remarkably dense storage medium, with every movie ever made able to fit in a volume the size of a sugar cube. It’ll be some time before DNA-based memory storage is viable commercially but researchers are getting closer to that holy grail of cheap data warehousing. [Link]

Huge networks of underground plants in the same family as mushrooms are a critical support for biological systems like forests. A new initiative seeks to understand and map the networks around the world. [Link]

The US is facing an unlikely shortage: Santas. by Sarah Al-Arshani (Business Insider)

Lots of people are looking for Santa, with inquiries to hiresanta.com surging 121% this year compared to the last two years. At the same time, many Santas are retiring, and others are worried about the pandemic; still more have passed away thanks to COVID. [Link]

North Carolina’s Furniture Hub Is Booming. What Comes Next? by Jeanna Smialek (NYT)

The surge in demand for furniture fueled by the pandemic is proving a temporary boon for furniture makers in North Carolina, but factories fear orders will drop off and as a result are hesitant to ramp up hiring and capacity expansion. [Link]

Today’s date is rare: It reads the same way forward, backward and upside down by Jay Cannon (USAToday)

Not only was the 2nd of December a palindrome, reading the date also reads the same upside down. Another such palindrome date is due until March 2nd of 2030. [Link]

Mining Bitcoin with pencil and paper: 0.67 hashes per day by Ken Shirriff (Righto)

There is some very complicated math underpinning cryptocurrencies like Bitcoin, but that doesn’t mean it can’t still be done by hand. [Link]

Amidst an explosion of gambling legalization and betting apps, 60% of November NFL games had seen underdogs cover the spread, leading to a historic route among bettors. [Link]

Nearly $1trn has followed into ETF and mutual funds this year, more than each of the last 19 years…combined! [Link; soft paywall]

Do childhood colds help the body respond to COVID? by Rachel Brazil (Nature)

Children who are exposed to a given strain of flu are better at fighting that strain off the rest of their lives. It’s an open question whether the same process will play out with COVID. [Link]

Stocks Down 2%+ Every Day This Week

This week was particularly volatile for the stock market with the S&P 500 seeing 1%+ moves every trading day from Monday through Thursday and then a decline of close to 1% on Friday.  We came across Etsy (ETSY) on Friday when it was down 7% on the day, and then we noticed that the stock had been down 2% or more on every trading day this week.  In wondering how many other stocks were down 2%+ every day this week, we found a total of 12, and they’re all listed below.  Along with Etsy, the other notable losers include Affirm (AFRM), Oatly (OTLY), and Clear Secure (YOU).  Affirm’s worst day was Wednesday when it fell 8%, but it fell another 5.7% on Friday to close the week down 21.7%.  Oatly began the week down 3.7% on Monday and down 3.9% Tuesday before falling 6.1% on Wednesday.  Smaller declines of 2% on Thursday and 2.8% on Friday left OTLY only down 17.3% for the week.  That’s relatively good compared to Kirkland’s (KIRK), which fell 39.1% on the week after losing a quarter of its value on Thursday and then another 8.5% on Friday.

Man The Barricades! There’s been a revolution in markets and policy since mid-November as policymakers decide to institute regime change with respect to their view of inflation. As a result, markets are diving for cover as bullets (falling commodity prices), bricks (a flattening yield curve), and bats (hawkish talk about the policy outlook) fly. Equities this week broadly reflected this sentiment: stocks rightly plunged on the news from Powell and suffered a number of sharp drops throughout the trading week. Overall the S&P 500 was down 1.2% after a 2.2% drop last week but did so with huge selling across stocks that are most sensitive to a hawkish Fed: hypergrowth, high valuation, recent IPO or SPAC, and related names got hammered as we will discuss later. Commodities markets also buckled as the Bloomberg Commodities Index fell for a third week running; oil and copper are now below their 200-DMA, natural gas posted its worst 4 day run in a quarter century, and grains lurched 4% lower in two sessions earlier this week. Even larger warning signals are coming from the bond market, where yields reacted to a pretty good (if messy) jobs report by plunging 10 bps at the 10y point of the curve; the 2s10s yield curve is now trading at the lowest levels since last December and suffered its biggest four session flattening move in a decade. We discuss all of this and more in this week’s Bespoke Report. 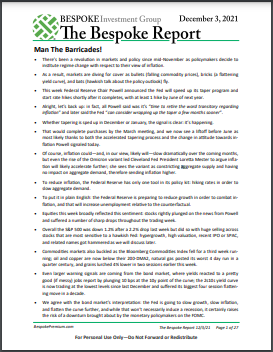 At the close on Wednesday (12/1), the small-cap Russell 2,000 had fallen 12.1% from its recent high on November 8th, leaving the index in “correction” territory.  A market “correction” is a drop of 10%+ that was preceded by a rally of at least 10% on a closing basis.  This correction for the Russell 2,000 is its 58th since data for the index begins in 1978.  Below is a table showing prior corrections for the Russell. The average correction sees the index fall 18.35%, which is just shy of the 20% threshold for a “bear market.”  The median correction is a little smaller at -15.4%.  In terms of length, the average Russell correction has lasted 73 days, while the median is 62 days.  For the current Russell 2,000 correction to reach average levels, it would need to fall another 7% from here, and it would come to an end on January 20th, 2022.

In terms of extremes, the biggest correction that the Russell 2,000 has ever experienced was the 41.9% decline seen during the initial COVID Crash from 1/16/20 to 3/18/20.  The longest correction lasted 397 days from 6/24/83 to 7/25/84.  In terms of the shortest correction, there were two that lasted 3 days.  One of those came during the Financial Crisis while the other happened last June.  Like this type of analysis?  See more of it with a Bespoke Premium membership.  Click here to learn more and start a two-week trial. 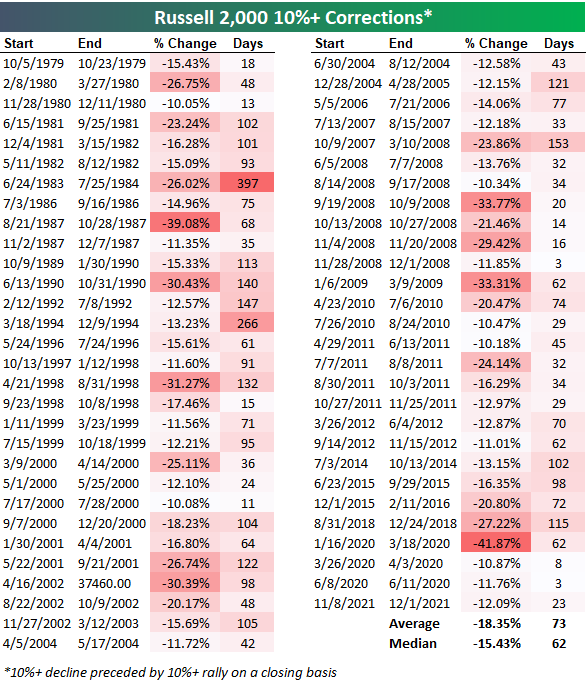 After five days where the S&P 500 has moved up or down 1%, futures are practically flat this morning as the market tries to catch its breath from all the volatility.  The quiet tone may not last long, though, as Non-Farm Payrolls was just released and came in much weaker than expected at just 210K compared to estimates for a gain well in excess of 500K.  Despite the weak print, the unemployment rate was much less than expected (4.2% vs 4.5%).  In terms of average hourly earnings, month/month growth was 0.3% vs 0.4%.  In addition to the jobs data, we’ll be getting ISM Services, Factory Orders, and Durable Goods all at 10 AM. The initial reaction to the jobs number has been slightly positive with Nasdaq futures leading the way.

Last night, the state of New York announced five additional COVID cases related to the omicron variant, and Hawaii announced one case.  At this point, all the cases appear to be mild which is encouraging. In South Africa, where the variant was first detected, the number of cases has tripled within the last three days, but thankfully, hospitalizations are not rising nearly as fast.  Barely a week after the omicron variant first made headlines, there’s still a lot we don’t know about this variant, but based on data so far, it doesn’t appear to be any worse than other strains.

It’s been quite a week in the markets, so investors probably deserve a quiet day for a change.  Check out the carnage that we’ve seen in US stocks since Thanksgiving when news of the Omicron variant first surfaced and then Powell’s hawkish pivot this week.  Every major US index ET we track in our Trend Analyzer is down more than 2%, while small caps are down more than twice that.  Market cap has really been a factor in market performance this week as the Micro-Cap ETF (IWC) is down close to 6% while mega-cap indices like the Nasdaq 100 (QQQ) and S&P 100 (OEF) are both down less than 2.5%. 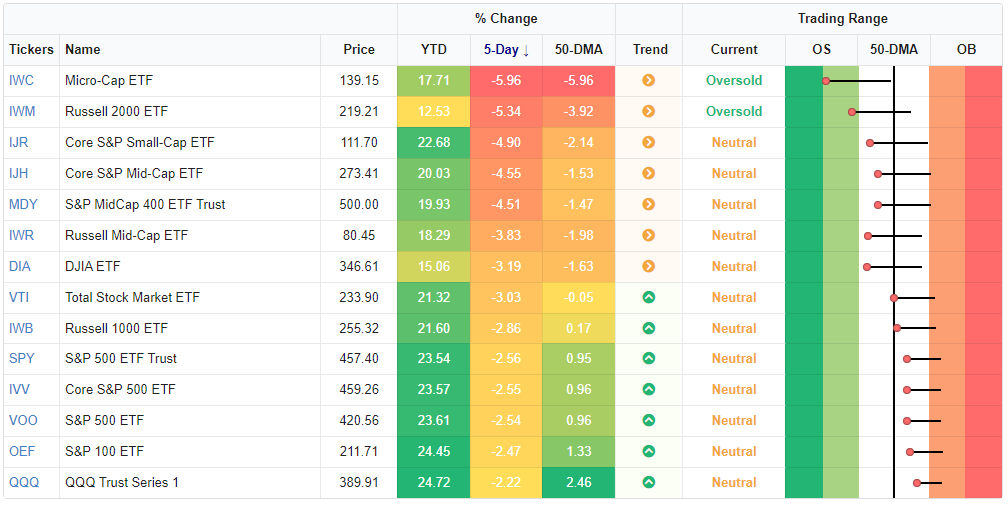 Looking for deeper insight into markets?  In tonight’s Closer sent to Bespoke Institutional clients, we begin with a look at the losses in the ARK Invest ETFs and natural gas.  We then provide a note on crude oil production followed by a look at price action in rates markets.  We then provide an explanation for week consumer confidence numbers before pivoting to stock market sentiment. 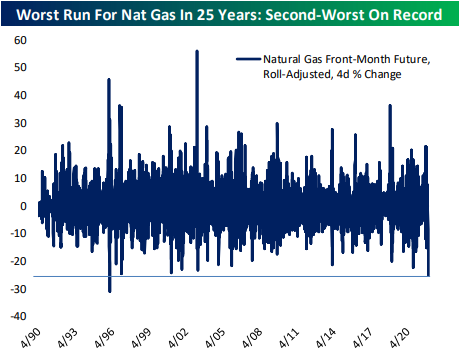