After a lousy report for the month of February when freak weather across the south temporarily shut down several areas of the south, Retail Sales bounced back with a vengeance in March as vaccine rollouts accelerated and stimulus checks were spent.

The moves higher in Retail Sales over the last few months have been incredible.  As shown below, while it took 40 months to make a new high following their pre-Financial Crisis peak, COVID only caused a five-month drought without a new high.  From the low in April 2020, Retail Sales have bounced 50%!

Even more impressive, though, is not only are total Retail Sales above their pre-COVID peak, but they are more than 17% above that peak just 14 months ago.  The second chart shows the 14-month rate of change in Retail Sales since 1992.  While the post-COVID decline was the steepest on record, the 14-month gain is the highest on record.   Ironically, had it not been for COVID and the stimulus it resulted in, there is no way Retail Sales levels would be where they are now. 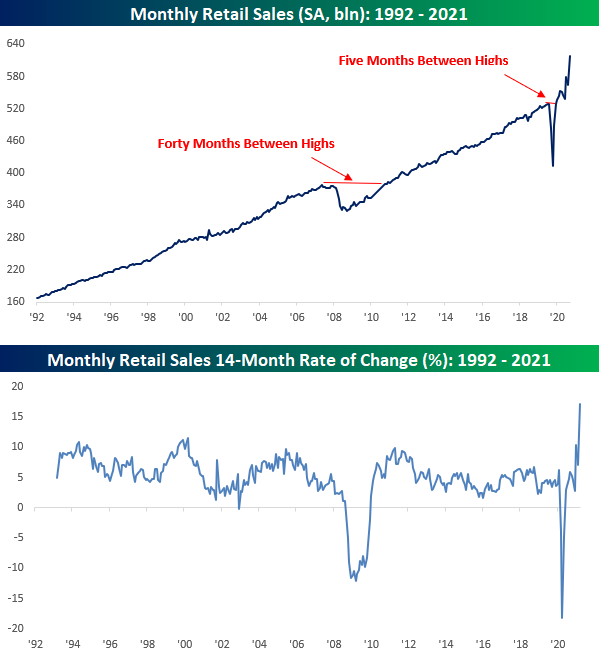 In our just-released B.I.G. Tips report, we broke out the details of the March report including its bright and dark spots. For anyone with more than a passing interest in how the COVID outbreak and subsequent stimulus is impacting the economy, our monthly update on retail sales is a must-read.  To see the report, sign up for a monthly Bespoke Premium membership now!

Next week we’ll officially kick off the Q1 earnings season as the major banks all start to report results.  As shown in the chart to the right, the pace of reports will start off slow but steadily pick up steam as the days go on.  Just 23 companies are scheduled to report next week, but that number will more than triple the next week and then more than double again the week of 4/26 which is the peak week for reports. There will be one more busy week of reports after that before things start to peter out after the first week of May. 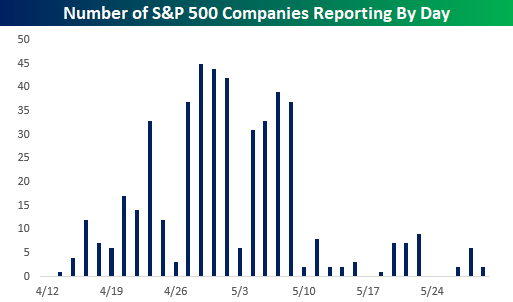